THE MASTER AND WARDENS 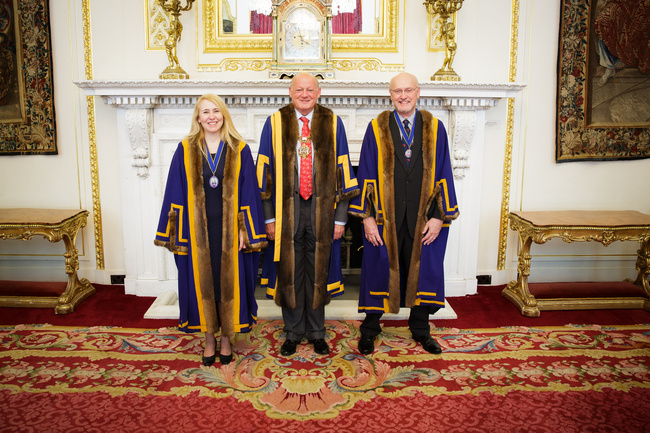 The Company is managed by a Court chaired by the Master, who is assisted by two Wardens. The Master serves for one year and acts as the ambassador of the Company throughout our industries and within the City of London.

Robert Flather is Chairman of Kolbus UK whose parent company Kolbus GmbH are manufacturers of industrial bookbinding and packaging machinery. For 23 years he was Managing Director and is now Chairman with particular focus on the UK manufacturing business Kolbus Autobox Ltd. The UK business is both a sales and service organisation as well as designing and manufacturing the Autobox range of machines in the UK factory in Dunstable. He has also been President of Kolbus France for 15 years and recently had a similar holding role for the USA.

Robert was educated at Oundle and studied engineering at Sheffield University. Prior to joining Kolbus in 1997, He worked in the steel industry (TI Stainless Tubes) before joining book printer Clays in Bungay as General Manager of the bindery. He then became Chief Engineer at Jarrolds in Norwich, the catalogue and magazine printer.

He is a Past Chairman of Picon, the Trade Association for machinery suppliers to the Printing, Papermaking and Paper Converting industries and also served as President of Global Print, the International Association of National Trade Associations for the Industry.

He became a Liveryman in 2002 and joined the Court in 2010. He has served on many committees including being Chairman of the Stationers Foundation, the educational charity of the company. He was also the first Chairman of the Marketing Advisory Committee.

Moira Sleight is Editor and Publisher of the “Methodist Recorder”, a weekly, national newspaper.

She was educated at Wisbech Grammar School and then Queen Mary College, University of London, where she studied English.

She is  a member of the International Society of Weekly Newspaper Editors (ISWNE) and also of the Independent Publishers Forum (IPF) of the News Media Association.

She has been a Liveryman of the Company since 2005 and has been on the Court since 2014. She has served on many committees, including chairing the Membership Development Committee. She is sector champion for National Newspapers and introduced and established the News Media Partners initiative.

Tony Mash is the President of TMA Consulting Inc.  He was cloathed in 2003 but first came to the Hall on Ash Wednesday 1962 as a member of the Stationers’ Company’s School choir.

Tony holds a B.Sc. in Chemistry from University College, London and an MBA from Institut Supérieur des Affaires, France and the Manchester Business School, where he won a British Institute of Management Silver Award for his thesis on pension fund management.

Tony has spent the majority of his career in senior roles in the Chemical Industry in Europe, North America and Asia with companies including ICI and AstraZeneca. In 2012, he retired as the Chief Executive Officer of the British Coatings Federation. In this role, he represented the UK Printing Ink Industry in its relationships with Government and the Media.

Within the Stationers’ Company, Tony has chaired the Industry and Marketing Advisory Committees and led Trade Association and Innovation Excellence events at the Hall.

Tony is a Past President of the Old Stationers’ Association.