The ambition of all City companies was to own a Hall and the Stationers' Company was no exception. In 1554 it bought Peter's College to the east of St Paul's Deanery. In 1606 the Stationers expanded to new premises at Abergavenny House on the site of the present Hall.

In 1666 the Great Fire destroyed Stationers' Hall along with the major part of the City of London. George Tokefield, the Clerk, managed to remove most of the Company's records to his house in Clerkenwell, for which thoughtful act the Company is indebted for the survival of its unique archive.

Work on the new Hall began in 1670 and in 1673 the new Hall was used for dinner on Lord Mayor's day. The total cost of construction was £3,000. In the 10 years following the Fire about £5,000 was spent on the Hall, warehouse, Court Room, Stock Room and tenements. Much of the money came from the profits of the Stock, as had the original purchase money for the property.

At the end of the 18th century, Robert Mylne, Surveyor to the Company since 1776, was asked to give a more dignified appearance to the frontage. The work was finished in the autumn of 1800. His son and successor, William, in 1825, improved the amenities of the Court Room. The third Mylne, Robert William (son of William), re-shaped and partially re-built the east wing of the Hall. In 1885, when the Stock Room was given its present shape, but with the old panelling restored.
The Hall Today

The Hall today is one of the most beautiful in London in spite of serious damage caused by enemy action in 1940. The Court Room was partially destroyed but was restored by 1957, and the ceiling of the Livery Hall had to be re-erected to a design of 1800.

In 2017 The Company created state-of-the-art storage and reading rooms, known as the Tokefield Centre, for its archive. 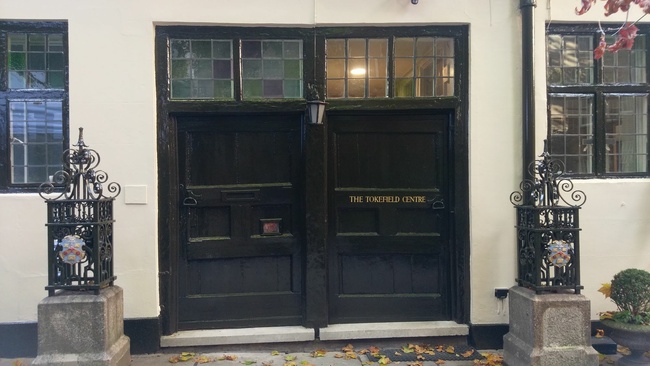 In 2020 it plans to start an ambitious project to install a lift and air cooling.