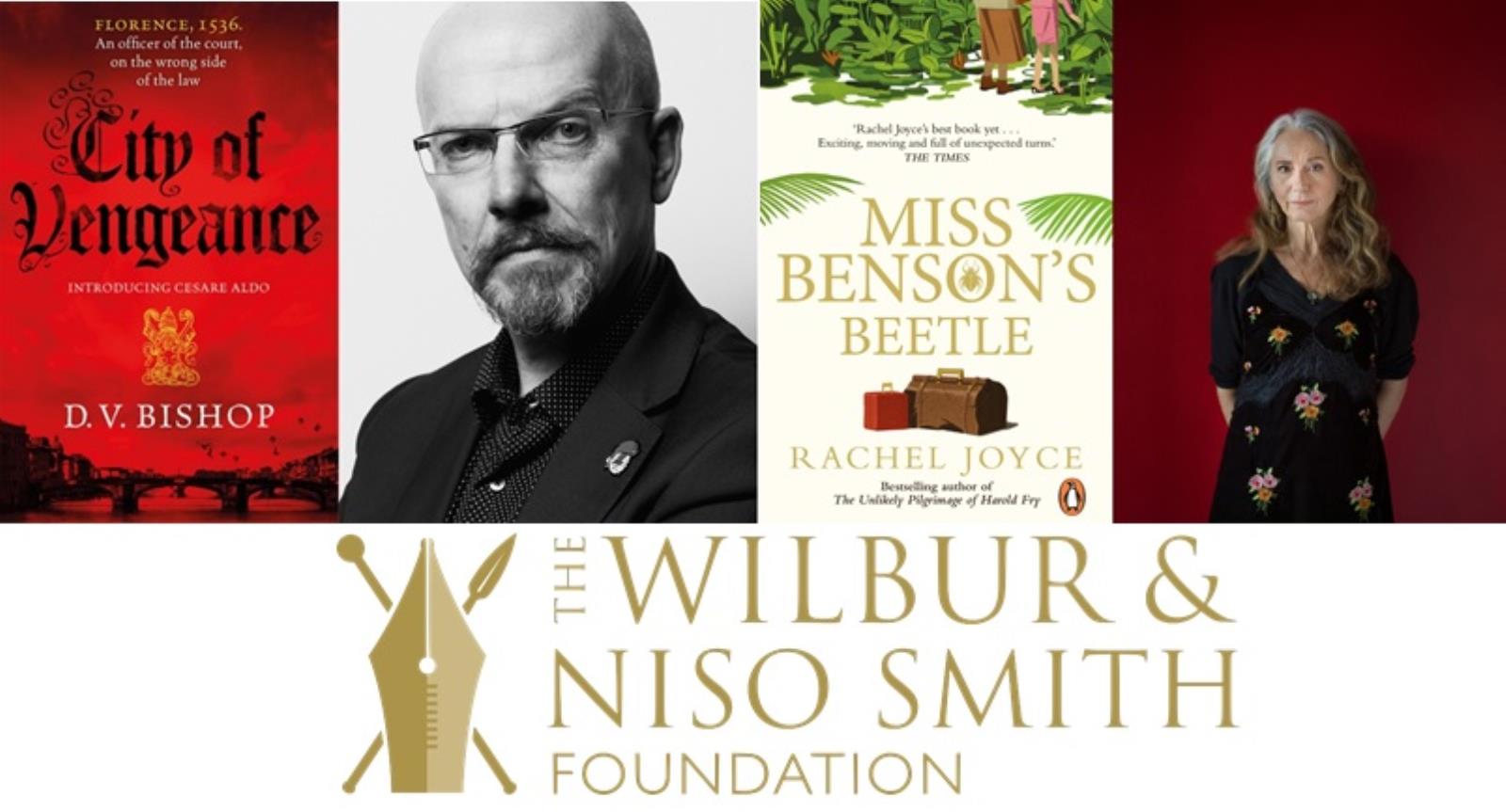 Following on from the success of the previous Literary Evenings, your Livery Committee is delighted to invite you to our thirteenth virtual Cocktail hour on Thursday 19th August at 6.00pm where you will be entertained by Liveryman Peter Day, holding a Q&A with Freeman Georgina Brown, manager of the Wilbur and Niso Smith Foundation and authors D. V. Bishop and Rachel Joyce.

About the Foundation
The Wilbur&Niso Smith Foundation was established in 2015 by bestselling author Wilbur Smith and his wife, Niso. The Foundation is a publishing and literacy charity that supports writers, promotes literacy and advances adventure writing as a genre. They work to uplift, inspire and educate writers and readers of all ages across the world. The Foundation administers the annual Wilbur Smith Adventure Writing Prize. The Prize supports and celebrates the best adventure fiction of today with awards for the Best Published Novel, Best Unpublished Manuscript and the Author of Tomorrow. The Best Published Novel award recognises the best adventure novels published in the last year, congratulating the writers and recommending readers their new favourite book.

About Georgina Brown
Georgina Brown is Manager of The Wilbur&Niso Smith Foundation. Before moving to London, Georgina worked in Dorset, Russia and the United States. Georgina is a Winston Churchill Memorial Trust Fellow. She holds an Undergraduate degree in Writing, Directing and Performance from The University of York, and a Post Graduate Certificate in Arts Fundraising and Philanthropy from The University of Leeds. She is a graduate of The Berkshire Hills Internship Program, an intensive arts management program at Massachusetts College of Liberal Arts. Prior to life at the Foundation, Georgina has worked in the fundraising ranks of a symphony orchestra and may be the only person to have ever run away from the circus.

About Rachel Joyce
Rachel Joyce is the author of the Sunday Times and international bestsellers The Unlikely Pilgrimage of Harold Fry, Perfect, The Love Song of Miss Queenie Hennessy, The Music Shop and a collection of interlinked short stories, A Snow Garden&Other Stories. Her new novel, Miss Benson's Beetle, is out now. Rachel's books have been translated into thirty-six languages and two are in development for film. The Unlikely Pilgrimage of Harold Fry was shortlisted for the Commonwealth Book prize and longlisted for the Man Booker Prize. Rachel was awarded the Specsavers National Book Awards 'New Writer of the Year' in December 2012 and shortlisted for the 'UK Author of the Year' 2014. Rachel has also written over twenty original afternoon plays and adaptations of the classics for BBC Radio 4, including all the Bronte novels. She moved to writing after a long career as an actor, performing leading roles for the RSC, the National Theatre and Cheek by Jowl. She lives with her family in Gloucestershire.

Miss Benson’s Beetle
Miss Benson's Beetle by Rachel Joyce is shortlisted for the 2021 Wilbur Smith Adventure Writing Prize. It is 1950. In a devastating moment of clarity, Margery Benson abandons her dead-end job and advertises for an assistant to accompany her on an expedition. She is going to travel to the other side of the world to search for a beetle that may or may not exist. Enid Pretty, in her unlikely pink travel suit, is not the companion Margery had in mind. And yet together they will be drawn into an adventure that will exceed every expectation. They will risk everything, break all the rules, and at the top of a red mountain, discover their best selves. This is a story that is less about what can be found than the belief it might be found; it is an intoxicating adventure story but it is also about what it means to be a woman and a tender exploration of a friendship that defies all boundaries.

About D. V. Bishop
D. V. Bishop is an award-winning screenwriter and TV dramatist. His love for the city of Florence and the Renaissance period meant there could be only one setting for his crime fiction debut. City of Vengeance won the Pitch Perfect competition at Bloody Scotland 2018, and he was awarded a Robert Louis Stevenson Fellowship by the Scottish Book Trust while writing the novel. When not busy being programme leader for creative writing at Edinburgh Napier University, he is planning his next research trip to Florence.

About City of Vengeance
City of Vengeance by D.V. Bishop is shortlisted for the 2021 Wilbur Smith Adventure Writing Prize. Florence. Winter, 1536. A prominent Jewish moneylender is murdered in his home, a death with wide implications in a city powered by immense wealth. Cesare Aldo, a former soldier and now an officer of the Renaissance city’s most feared criminal court, is given four days to solve the murder: catch the killer before the feast of Epiphany – or suffer the consequences. During his investigations Aldo uncovers a plot to overthrow the volatile ruler of Florence, Alessandro de’ Medici. If the Duke falls, it will endanger the whole city. But a rival officer of the court is determined to expose details about Aldo’s private life that could lead to his ruin. Can Aldo stop the conspiracy before anyone else dies, or will his own secrets destroy him first?

We hope you can drop in and join us at 6.00 pm, with a glass of wine, Pimms or G&T, for what will be an excellent evening. For those unable to join on the day, we will be recording the event and the link will be published on our website.