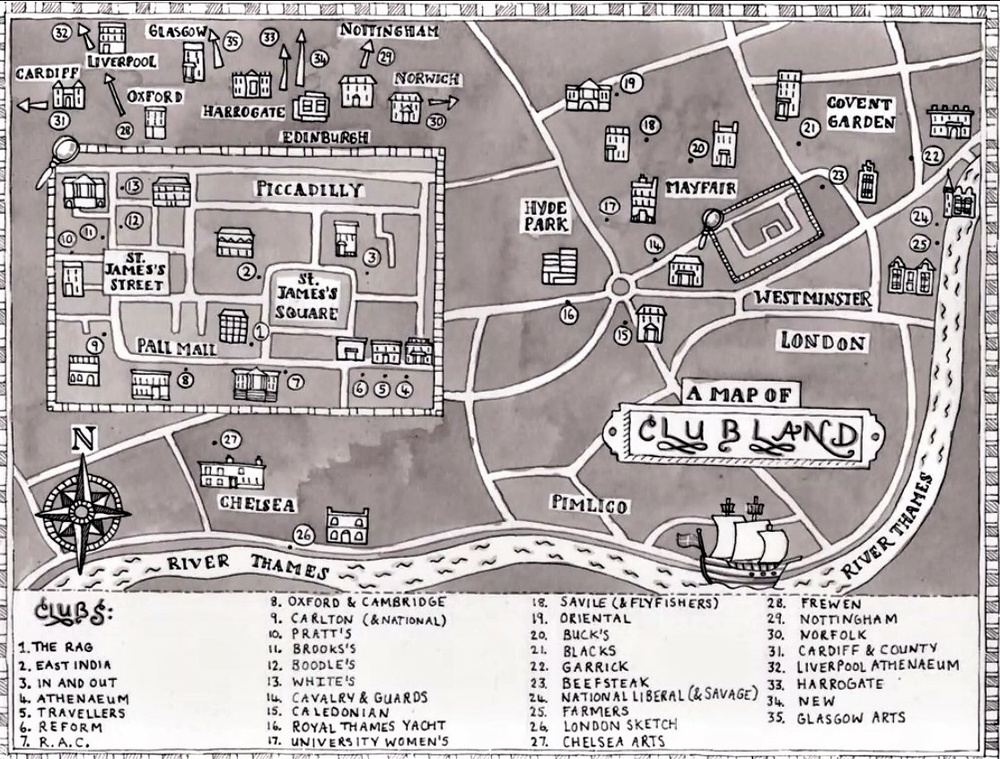 On 21 April the Livery Committee were delighted to welcome members and their guests via Zoom to hear the Reverend Sam Aldred talk on Clubland's Hidden Treasures  Clubland’s during which he explored the incredible collection of art and artefacts inside Britain’s (and in one case the USA's) most exclusive clubs.

Freeman Richard Gilpin has reported on the event and a full version of his report will appear in Stationers' News but here is a taster and you can watch the talk by clicking on the image below.  Richard writes:

The Reverend  Sam explained that the evening’s talk would be based on material from his own book Clubland’s Hidden Treasures, published in 2020 and that he would sraw on five case studies  the first of which was The Beefsteak Club.

In its initial incarnation The Beefsteak Club was known as the Sublime Society of Beefsteaks, and was  founded in 1735. It took as its motto: 'Beef and Liberty'. The current club was founded in 1876 and has preserved, as a tangible link to this earlier foundation, the gridiron (an iron rack on which the steaks were cooked over coals) which belonged to the Sublime Society's eminent founder, the scene painter George Lambert. This is the club’s greatest treasure.

The Rev Sam then took his audience across the Atlantic for his next club, the Tavern Club of Boston, founded in 1884. Early in its life the club bought a performing bear cub ... soon to be sold back to the circus! Over the years, and in its memory many bear-themed items were amassed. Despite this, the club’s treasure is a (now cracked) Arts and Crafts punchbowl.

The Rev Sam’s third club was White’s.  Its unique treasure is its Betting Book.  Members would bet on anything and everything, often for extremely high stakes. Some bets were frivolous and some were arguably immoral.  All went into the Betting Book. As time went by the culture changed and the wagers stagnated, but the Book lived on.

The Savage Club – sometimes regarded as a fortress of Bohemian London – was the next on the Rev Sam’s tour. Currently a somewhat incongruous resident at the National Liberal Club. One of The Savage's  more remarkable members being the grotesque and eccentric actor E J Odell .  The chair on which he used to sit at the bar – and glower at those who might wish to displace him – now carries a plaque in his memory. This is the most treasured possession of the club.

The Athenaeum Club was the Rev Sam’s final choice.  Its unique treasure  is its cloth-bound Question Book, which contains many sometimes challenging and frequently esoteric questions – with more than a few answers. In recent years the Question Book has been superseded by the Internet and is no longer in use.