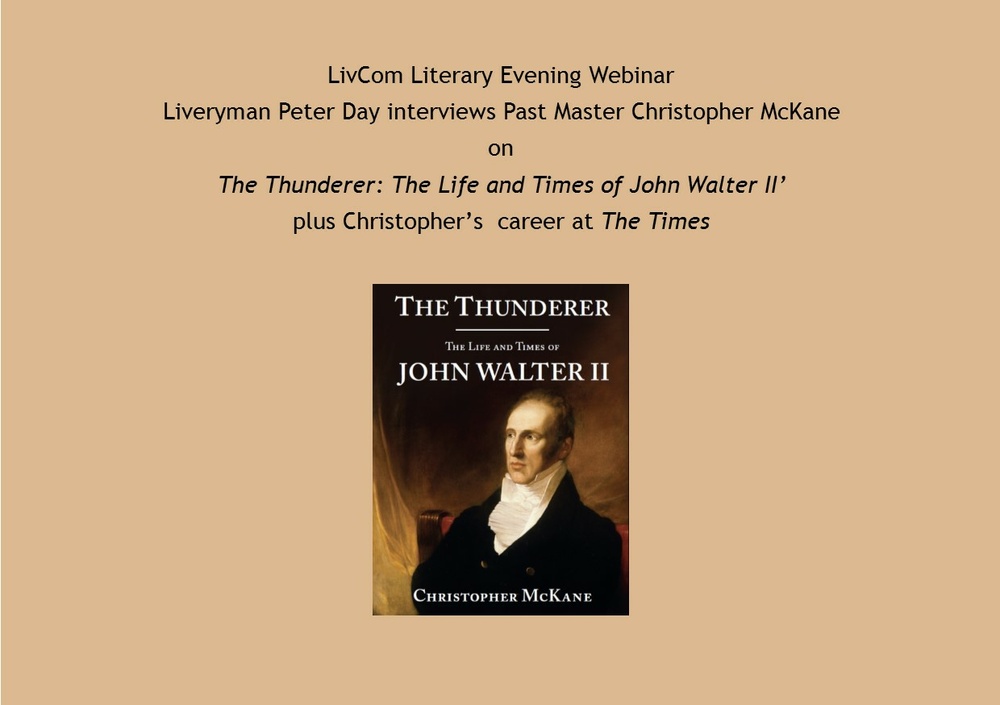 The Livery Committee presented Liveryman Peter Day in conversation with Past Master Christopher McKane about his book  ‘The Thunderer: The Life and Times of John Walter II’ plus hiscareer at The Times on 17 June 2020 via Zoom.

In October last year Christopher McKane launched his book, The Thunderer, in Stationers’ Hall. As he spoke, the bells of St Paul’s Cathedral rang out in commemoration of Trafalgar Day. Now, less than eight months later, 69 of us had the opportunity to hear him in our own homes, talking about the book in conversation with Peter Day. This was thanks to Zoom, a technology that most of us had never heard of before the onset of the Covid virus, while monuments to Nelson are being protected against threats of destruction because of the Royal Navy’s role in keeping slave trading  routes open during the Napoleonic Wars. It is another world.

Mike James, in his introduction, likened our June event to a literary cocktail party, and so it proved, as Peter led us through a mixture of topics. He began by asking Christopher about The Thunderer, an account of the life of John Walter Thompson II. John was the son of the founder of The Universal Daily Register which on the first day of 1788 became The Times. Taking advantage of steam printing technology, the paper enjoyed the biggest circulation in the country by the reign of Queen Victoria, sold all over the country thanks to a burgeoning transport network. John Walter II was a qualified apprentice, knowledgeable in all areas of newspaper-making, and he was a strike breaker, prefiguring 1986 and the move of The Times to Wapping.

This enabled the discussion to move on to Christopher’s own career in journalism, which began fifty years ago, when he ‘fell into’ a job at the Oxford Times as a trainee sub-editor  and went on to become deputy editor at The Times, with a  spell as the picture editor at the newly created Independent. As that new paper laid great emphasis on the quality of the images, the job was made in heaven.

Christopher recalled the Wapping clash as a bruising experience, with the printing unions proving intransigent. It was ironical therefore that as a Stationer he found himself on the Court in 2000 with Brenda Dean, general secretary of SOGAT during the 1980s. Although previously on opposite sides of the fence, they got on famously. Characterising the Court as a body of thirty opinionated people, he felt that the time to do things was as a Warden, with the role of Master as a front man, although great fun.

As questions from guests were passed to Christopher by Peter, so interconnections were made between the newspaper industry in the time of John Walter II, and what is happening today. The Times described the outbreak of cholera as a ‘disgraceful case of negligence’ for which the government was unprepared. In an age of digital newspapers, The Times is in a relatively strong position during this period of pandemic. No doubt this will feature in Christopher’s next book, on the paper in recent times, drawing upon the people with whom he has worked.

On a note of optimism, our cocktail party drew to a close.

You can watch a video of the conversation here: