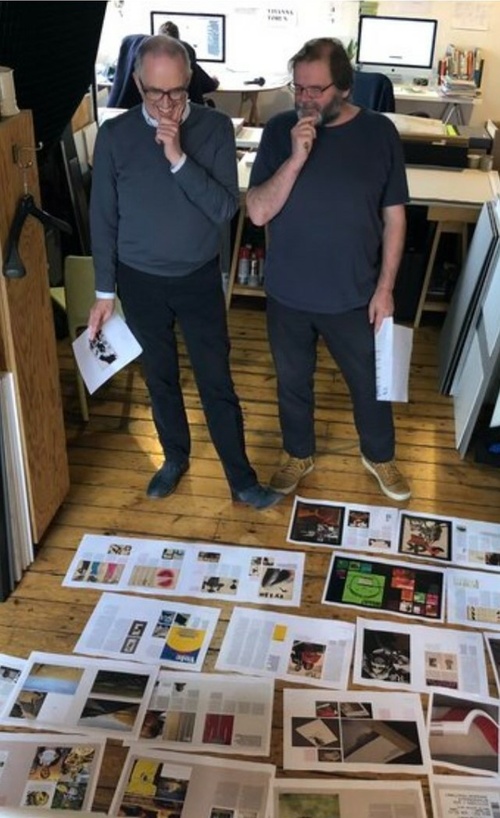 In this digitally disrupted world, what is the future of print?

Liveryman Phil Elder reports that on 15 April 2021 Liveryman Peter Day was in conversation with John Walters, the managing editor, and Simon Esterson, the art director, of Eye magazine in another of the Company's very popular Cocktail Evenings. Eye, published quarterly, is an international review of graphic design and visual culture. It is in its 31st year and issue 101 is about to hit the newsstands.

Speaking first to Simon, Peter asked him about his early life. Simon knew from very early on that his interest lay in graphic design and he spent more time than he should have working on the school magazine. On leaving school he went to work for a print shop on Conduit Street in London. This proved invaluable training and he went on to design (amongst many others) the architecture and design magazine Blueprint, History Today, The Guardian and the redesign of The New Statesman.
John also started with his school magazine, and then having studied maths and physics at university, formed the band Landscape (of “Einstein A Go-Go” fame). He then moved into record production (working with such notables as Kate Bush) and then onto magazines and newspapers including such publications as the Architectural Review and The Guardian.

It became clear (at least to me) from Peter’s questioning, that Simon’s and John’s passion lies in the Eye and especially so from the time they became the joint owners in 2008. Being in control of not only the design but also the finances at the Eye has allowed them both to express themselves in a way which would not be possible if they were constrained by a proprietor. When the Eye was owned by its previous proprietor it was always published on time but maybe not quite ‘right’ – now it’s always ‘right’ but maybe not quite on time. So saying, the current edition was to be finished last week but is yet to go to press.

They’ve used this freedom to good effect experimenting with different forms of printing. For instance Eye 94 was digitally printed with every copy being numbered and every cover being printed with a slightly different colour (sadly copy 0001 has been lost). This freedom also allows for more varied and niche magazines with much smaller print runs rather than the necessarily larger runs of traditionally printed magazines.

All in all it was an absolutely fascinating hour and I was left thinking that, as with the best of magicians, having been told how the trick is done one is even more appreciative of the skill that goes into the performance.

You can watch the discuss by clicking the image below