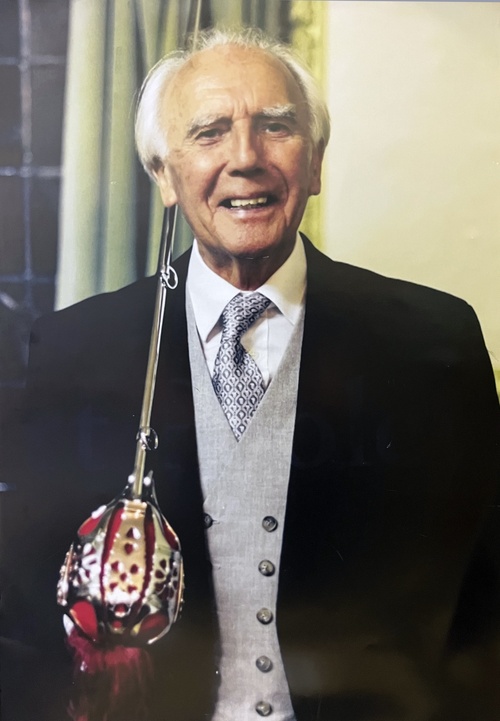 Our congratulations to Liveryman Robert Pooley MBE on being awarded the LVO in the New Year's Honours List.

Liveryman of the Stationers' Company and Senior Past Master of the Air Pilots' Company, Robert Pooley MBE has been awarded the LVO (Lieutenant of the Royal Victorian Order) for services to the Royal Household by HM The King. After fifty years creating and promoting his eponymous flight equipment business worldwide, Robert handed over that business to his son, Sebastian, and at the age of 70 started Pooley Sword in 2005. The aim was to fill the gap created by Wilkinsons closing down their sword making division and he set about learning the intricacies of sword making and developing the right contacts.

He quickly gained the confidence of the Armed Forces throughout the UK and the Commonwealth, supplying precision crafted individually personalised ceremonial swords to graduating cadets of all the services as well as donating the Swords of Honour to the military colleges. In addition, the skilled craftsmen at Pooley Sword refurbish British military swords, including historic swords dating back as far as the 16th century.

This richly deserved award celebrates Robert’s enterprise and tenacity at a time of life when most would be long since retired, and follows closely on his recent award of the Air Pilots Sword of Honour for lifetime services to general aviation (an irony which was not lost on him or the family, since he was the original donor of the sword in 1972!)