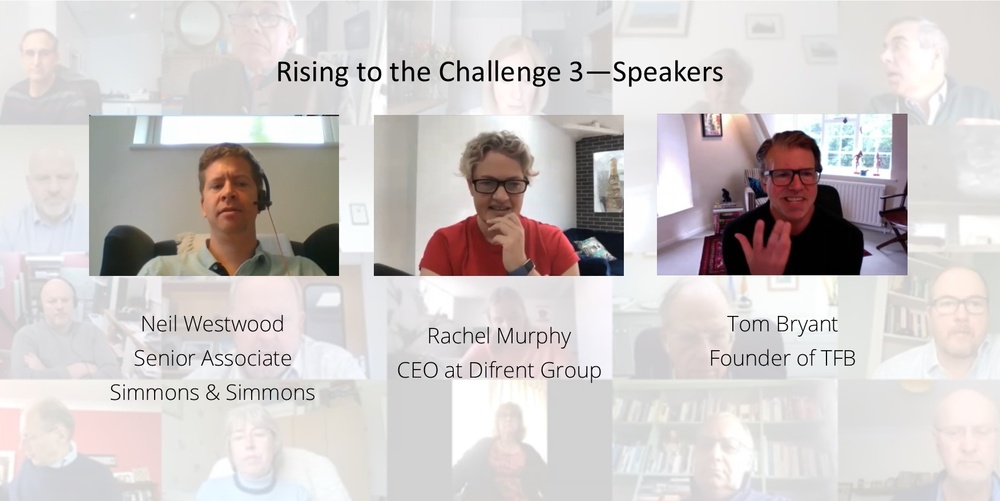 Rachel Murphy’s telephone rang at 9pm on a Sunday evening in mid-March, as the dark clouds of the Coronavirus crisis were gathering over the country.

The call was a plea for help with the government’s digital response to the pandemic.

“We mobilised in 24 hours,” Rachel, CEO at Difrent Group, told the Company’s third Rising to the Challenge webinar.

The work produced by Rachel’s teams has had a high profile direct impact on the Covid-19 fight-back.

Hundreds of thousands of emergency volunteers have been recruited using one of the products, the NHS 111 helpline has been able to bring retired clinicians back to work and a system for testing medical staff who were isolating at home meant some key workers could go back to the front line.

Rachel told the webinar chaired by Carol Tullo: “Lots of businesses plan for eventualities but I never conceived of something like this happening in my lifetime.

“I have spent twenty years doing turn-around stuff in organisations where things are normally on fire, so I like it dramatic - but this is a different league.”

Rachel was struck by how the different suppliers called in to help all freely collaborated in the emergency. “One of my observations is that suppliers leave their badge at the door - it is the drive around delivering the outcome that is the most important part.”

Rachel acknowledged that mistakes had been made – and referred to efforts to build the now-controversial track and trace app. “The approach around trying to build a world class solution was a dangerous one because the NHS is a provider of health services, it is not a tech start-up.”

An alternative approach would have been to use a tried and tested system already in use elsewhere.

Neil Westwood, senior associate at lawyers Simmons & Simmons, also spoke of how the crisis had confronted lawyers with challenges understanding the legal implications of tracing applications.

“Not many lawyers knew about contact tracing before the pandemic emerged – there is not much hard law that frames how these applications can operate,” he said.

“The pandemic has been horrible in many ways but the way in which technology has helped combat the pandemic – or not - has been fascinating.”

There have been concerns about the privacy of the tracing app but Neil said: “There are arguments to say we can a little more relaxed - when we think about how people use commercial digital services that will involve the collection of vastly greater data in a less controlled fashion.”

Millions of people have been forced to embrace new technology as a result of the lockdown – and that has included Zoom, which has been used by the Company to host webinars.

Tom Bryant, founder of TFB and a specialist in digital transformation and digital culture, said: “You can imagine a worldwide case study on how we are culturally and psychologically adopting new tools.”

And he urged people trying a new application to have fun experimenting.

“Just try, experiment, push your comfort zone, try these new tools and really get the benefit.