This day in the archive: 11 May

The 11th of May 1816 saw the publication of Kubla Khan. The poem has captured the imagination of readers ever since, and has crept into popular culture. In Orson Welles's Citizen Kane, for example, the eponymous newspaper magnate names his mansion Xanadu, epitomising its extravagance and luxury - and his own hubris.

Samuel Taylor Coleridge's Kubla Khan was published in a pamphlet alongside two more poems. His long narrative poem Christabel, with its supernatural themes, exercised a considerable influence on the writing of Edgar Allan Poe, and The Pains of Sleep has been read as a corrective to Kubla Khan, describing as it does one of the symptoms of withdrawal from the opium which fuelled Kubla Khan's hallucinatory imagery. 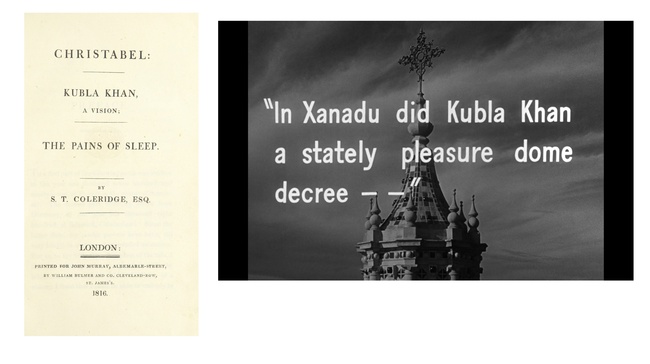 The poems had been completed some time earlier, but it was only after meeting  Lord Byron in 1816 that Coleridge submitted them to Byron's own publisher, John Murray. That year Coleridge also put himself into treatment for his addiction, allegedly still holding the proofs of Christabel when he turned up on the doorstep of apothecary-surgeon James Gillman.

The publishing house of John Murray was established in 1768. The first John Murray (1737–1793), originally John McMurray, infamously started the business under the conviction that 'Many blockheads in the trade are making fortunes', as he observed in a letter to the poet William Falconer. Initially focusing on retail, John Murray senior benefitted from the House of Lords decision of 1774 that neither an author nor a printer could exercise common law copyright control of a creative work after the statutory period of copyright had ended. This was a milestone in the development of copyright law, and its implications were not entirely welcomed by the Stationers' Company. For one thing, it allowed Thomas Carnan to win his challenge to the Stationers' monopoly of the almanack trade. 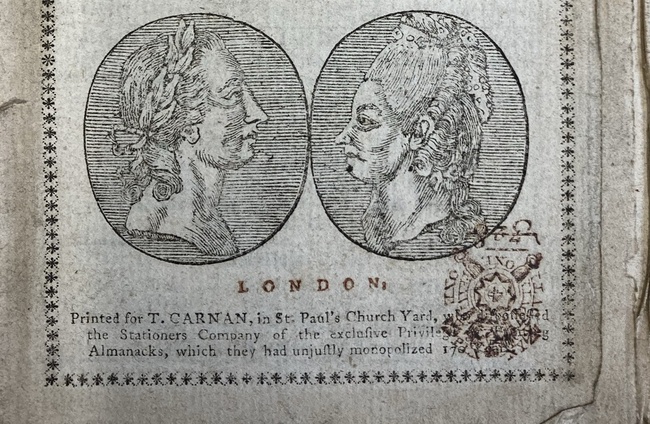 Stationers' Company Archive, Carnan's Ladies' and Gentlemen's Diary 1779, extract from title page. The text reads: 'Printed for T. Carnan, in St. Paul's Churchyard, who dispossessed the Stationers' Company of the exclusive Privilege of Printing Almanacks, which they had unjustly monopolized 170 years.'

But it opened up new opportunities to publishers such as Murray, whose inexpensive reprints of the poetry and prose of established writers including Shakespeare, Thomas Gray and Daniel Defoe formed the bedrock of his commercial success. This allowed Murray to expand into publishing medical and scientific titles, and reviews.

After serving an apprenticeship to his father's business partner Samuel Highley, John Samuel Murray (1778–1843) gained the Freedom of the Stationers' Company on the second of December 1800, and was admitted to the Livery on the same day.

Two years later, he and Highley dissolved their partnership, with Highley taking the medical titles. Murray eventually worked his way into the heart of London literary and intellectual life. He published the works of scientists including Faraday and Babbage, political economists including Malthus, and poets including Coleridge and Crabbe. He had a close working relationship and friendship with Byron, whose career he helped to advance, until their temperamental and political differences proved too great. Murray's combination of curiosity, literary discernment and business acumen shaped the ethos of the firm. That ethos is perhaps best expressed in John Murray's publication, in 1859, of two seminal works:  Darwin's The Origin of Species, and the original self-help book, Samuel Smiles's Self-Help, with Illustrations of Character and Conduct. Smiles's book, now somewhat less familiar than Darwin's, tapped into a Victorian trend for self-improvement, and was a best-seller in its day. 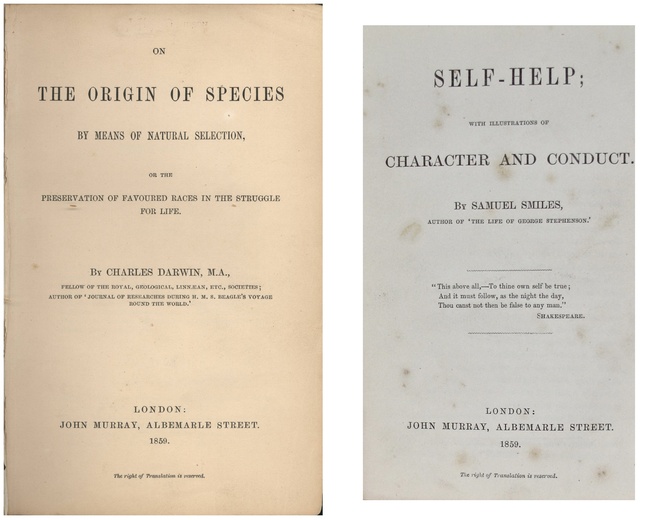