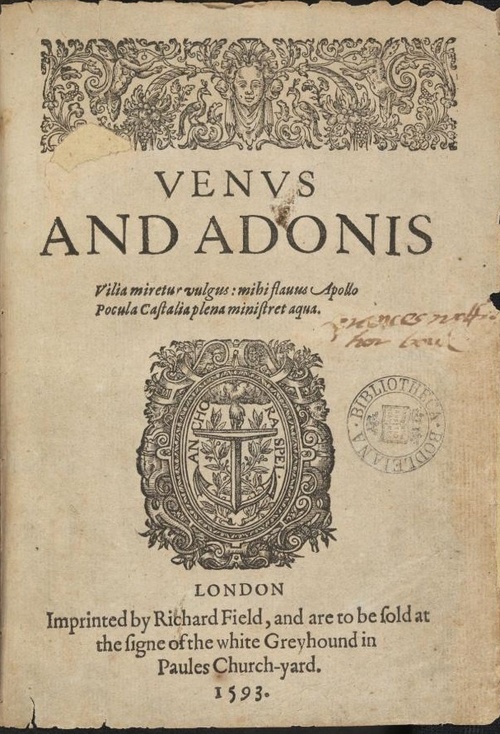 Here we discuss the publication of Shakespeare's long poem  Venus and Adonis.

Shakespeare's first printed work, the long poem Venus and Adonis, was written under a lockdown of sorts. In an attempt to curb the spread of an outbreak of bubonic plague, the authorities closed all theatres between 1592 and 1594. Forced to explore alternative sources of income, Shakespeare, like many other playwrights in that situation, turned to poetry.

Venus and Adonis became a best seller, and was the work which made Shakespeare famous during his lifetime. The poem is a tragicomic rendition of the doomed relationship between the goddess of love and a beautiful hunter whose youthful charms are such 'that the star-gazers, having writ on death/May say, the plague is banish'd by [his] breath'. Shakespeare's version presents Venus as an obsessed predator 'plucking' Adonis from his horse to seduce him. Adonis, however, meets her infatuation with indifference, for 'hunting he loved, but love he laugh'd to scorn'. His refusal to heed her warnings leads to his death, leaving the rejected and grieving Venus to declare that 'sorrow on love hereafter shall attend.'

As well as documenting what Shakespeare's contemporaries would have seen as his major work, the entry of copy for Venus and Adonis gives us some fascinating information about the material circumstances of its printing.

Venus and Adonis was entered into the Stationers' Register by the printer Richard Field. Field, like Shakespeare, came from Stratford-upon-Avon, and scholars have speculated that this is why Shakespeare sought him out to print his first text. It's certainly less likely that Field, who specialised in scientific and geographical texts which required the fine printing techniques for which he was known, made the first approach. Field was also the business partner of John Harrison, to whom he subsequently transferred the rights to Venus and Adonis. It is Harrison's shop at the sign of the White Greyhound to which the imprint in the first edition's title page refers.

Venus and Adonis went through ten editions in Shakespeare's own lifetime. Although today its reputation has been overshadowed by Shakespeare's dramatic output, the long poem remains highly regarded by literary scholars. Its curious mixture of eroticism, farce and tragedy has captured the imagination of artists as well. Maverick American painter and print-maker Rockwell Kent created a series of 21 illustrations in the Art Deco style for a fine art publication of the poem by the Leo Hart Printing Company. And as recently as 2019, a new edition, illustrated by acclaimed painter Marlene Dumas, was released by art publisher David Zwirner Books. 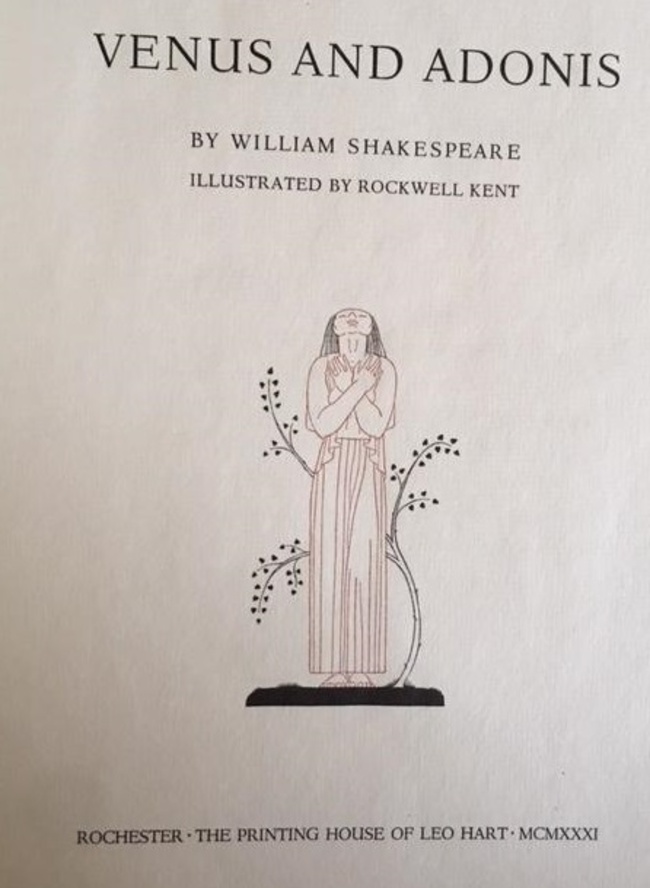