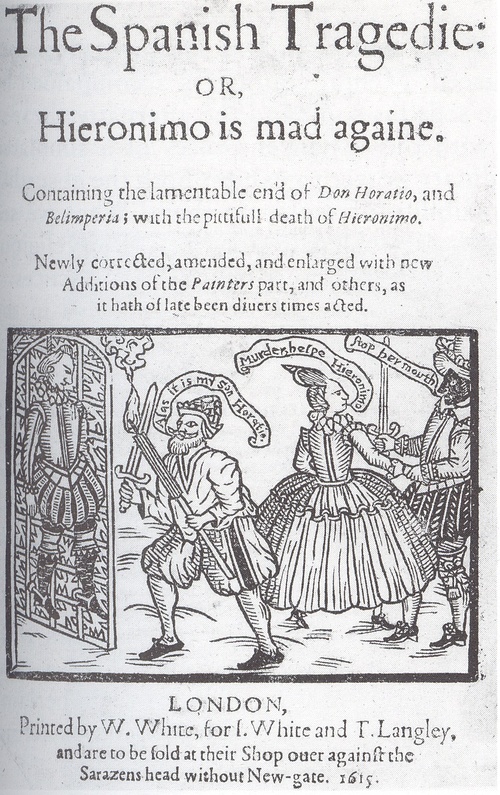 The subject of Thomas Kyd's The Spanish Tragedy came up in conversation recently, and I remembered the impression that play made on me when I first came across it: not only did it establish the genre of the revenge tragedy in Elizabethan theatre (Revenge is, quite literally, one of its characters), but it boasts one of the best subtitles ever, being known in full as The Spanish Tragedy, or Hieronimo is Mad Again. I decided to reacquaint myself with the history of this strange and seminal drama, and to investigate its registration at Stationers' Hall.

In its day, The Spanish Tragedy was a huge popular success. The Elizabethan impresario Philip Henslowe, whose business diary is one of the most important surviving theatre records we have of this period, tallied twenty-nine performances between 1592 and 1597. The play toured to the Continent, and both German and Dutch adaptations have survived. It was still being performed in the seventeenth century, and even gets a mention in Samuel Pepys's diary.

Pepys gives the following, less than glowing review of a performance he attended on 24th February 1668, at the Nursery Theatre:

'where none of us ever were before; where the house is better and the musique better than we looked for, and the acting not much worse, because I expected as bad as could be: and I was not much mistaken, for it was so... Their play was a bad one, called “Jeronimo is Mad Again”, a tragedy. Here was some good company by us, who did make mighty sport at the folly of their acting, which I could not neither refrain from sometimes, though I was sorry for it.'

The Spanish Tragedy's publication history is no less impressive than its box office success, with at least eleven editions being printed between 1592 and 1633. No doubt due to the play's popularity, its entry into print was not without complications.

Liber B f293r - entry of copy for The Spanish Tragedy

The play was first entered in the Stationers' Register on 6th October 1592, to Abel Jeffes, under the title The Spanish Tragedie of Don Horation and Bellmipera. However, the earliest quarto imprint which we have of The Spanish Tragedie, Containing the lamentable end of Don Horatio, and Bel-imperia, was printed by Edward Allde for Edward White, certainly no later than 1592. 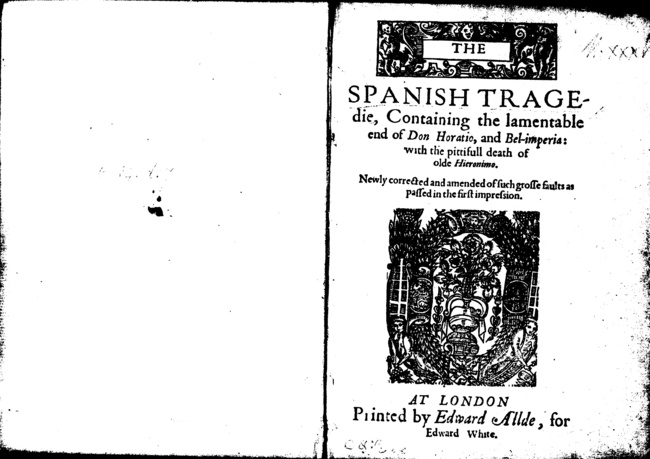 Title page of Edward White's publication of The Spanish Tragedie

The title page of this edition refers to an earlier printing, possibly by Jeffes. Whatever the case, in December 1592 the Stationers' Company Court faulted both Jeffes and White for printing titles registered to each other, fined each man ten shillings, and ordered all copies of the transgressing titles. 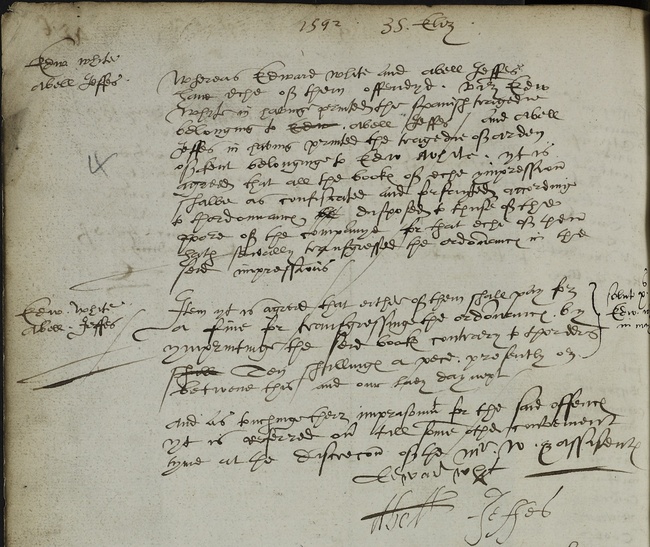 According to this ruling, Jeffes had brought out an imprint of The Tragedie of Arden, a title registered to White. This play is notable as the earliest surviving Elizabethan domestic tragedy, an early modern 'true crime' drama, based as it is on a recent and local event: the murder of Tudor businessman Thomas Arden by his wife Alice and her lover Mosby, in 1551. The authorship of this play is unknown, and it has variously been attributed to Christopher Marlowe, Thomas Kyd, and even William Shakespeare. We're on surer ground with the authorship of The Spanish Tragedy. Poet and playwright Thomas Heywood attributes the play to Kyd in his prose work An Apology for Actors (first printed in 1612), and more recent scholarship on the style of the text seems to support this. The structure and characterisation of The Spanish Tragedy, with such innovations as its use of a play-within-a-play, place its author among the great Elizabethan dramatists.

In general, attribution is difficult for drama of this period, and the full extent of Kyd's oeuvre remains unknown. Equally, few of the facts of Kyd's life survive, the most well-documented being his arrest and imprisonment in 1593 for possession of heretical documents. It's possible that Kyd fell foul of a politically motivated attempt to incriminate his fellow playwright Christopher Marlowe; certainly Kyd claimed that the 'heretical documents' belonged to Marlowe, not him. Marlowe was also briefly arrested, but was killed in a pub brawl in Deptford shortly after his release. Kyd himself died about a year later, freed from prison but severely damaged by his time there.