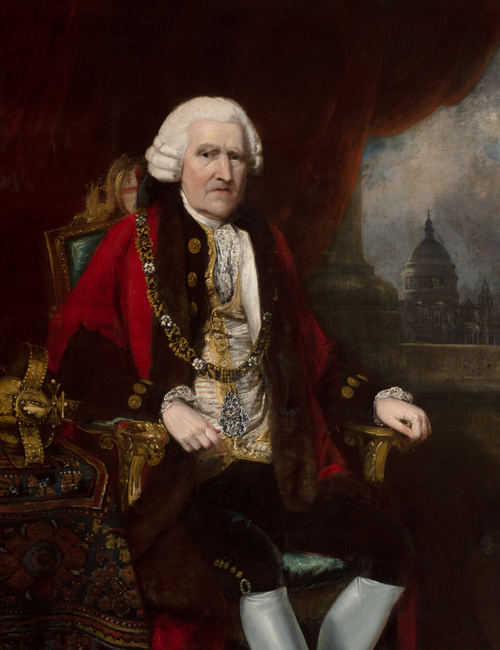 This article tells the story of Sir John Boydell (1720-1804), the subject of one of the first paintings a visitor to the Hall encounters on the Crush Landing leading to the first floor entrance. The painting was made in 1790 by a Scottish graduate of the Royal Academy Schools, John Graham, who also contributed a painting to Boydell’s “Shakespeare Gallery”.

"No print publisher before or since has ever exerted as much influence on the course of British art".  In those words the Dictionary of National Biography sums up the career and achievement of Sir John Boydell, Alderman in 1782, Master of our Company in 1783, Sheriff of London in 1785, and Lord Mayor of London in 1790. Our painting captures Boydell on that last date, in his Mayoral robes, a view of St Paul’s Cathedral at his side recording his pride in his civic duties.

Boydell, born in 1720, started his working life as an engraver. On finishing his apprenticeship he set up shop on the Strand to sell topographical prints.  He quickly realised the potential to expand his business by dealing in prints produced by others, and especially in prints coming from France – at this time the country setting the gold standard for reproduction quality and fine engraving technique.  Responding to strong market demand for engravings from across the Channel, he changed his business model from print seller to importer and highly successful print publisher.  By 1760 he had accumulated a considerable fortune.

Much of Boydell’s trade with France, though, had been one way traffic. There had been little interest and still less a market for British engravings selling into France.  Boydell single-handedly set out to alter that balance of trade by first commissioning one of the foremost engravers of the day in Britain, William Woollett, to engrave a spectacular history painting by one of the foremost British painters of the day, Richard Wilson, to the highest standards of quality and finesse. No expense was spared.  And the gamble paid off – the print (entitled Destruction of the Children of Niobe) was a huge success for Boydell’s dealers in France. Boydell quickly followed up on that triumph by commissioning many more high-quality history engravings, successfully changing continental opinions and respect for British artists and engravers to such an extent that within ten years the balance of trade in fine art prints between Britain and France had been completely reversed and many a British artist’s career prospects spectacularly improved.

Boydell still remains best known for the enterprise to which he devoted much of the last twenty years of his life, the “Shakespeare Gallery”. This project involved contracting many of the famous artists and engravers of his day to illustrate the plays of Shakespeare, following which he would sell to the public both the original paintings and then, more importantly, sets of the printed engravings reproducing the paintings. The artists Boydell commissioned included Benjamin West, painter of our very own flagship King Alfred picture; as well as George Romney, Henry Fuseli, and Angelica Kauffman. The project met with fine initial success … but to Boydell’s misfortune the onset of the French Revolution in 1789, which coincided with the opening of the Gallery, soon called a halt to British trade with France on which so much of Boydell’s publishing success had been built. In 1804 the Gallery was forced to close, a matter of months after Boydell’s own death at the age of 84.

John Graham (1754-1817), the maker of our portrait, was a teacher of art as well as an assiduous portrait painter.

A Scot, he trained at the Royal Academy Schools in London and exhibited with them many times in the 1780s and 1790s before returning to Edinburgh to take up an important teaching position.

Graham was acquainted with Benjamin West, who may have introduced him to Boydell both for the portrait commission and also to arrange Graham’s contribution to Boydell’s beloved Shakespeare Gallery, his dark and dramatic Othello and Desdemona, here shown in mezzotint. 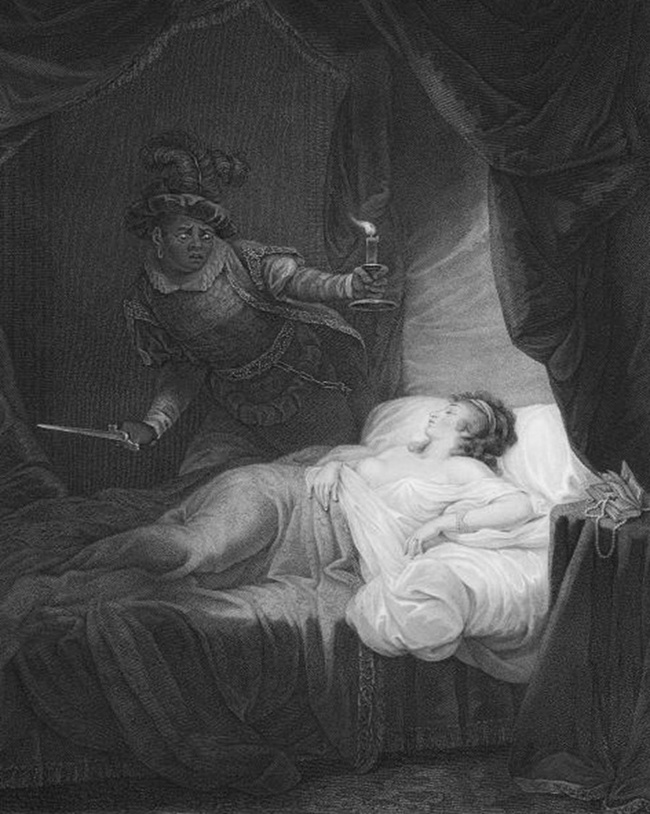