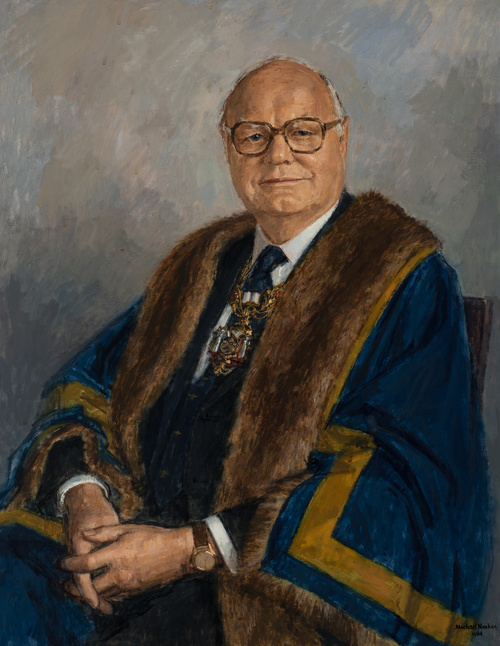 This article  by Liveryman John Peacock is the next in his series on portraits hanging in the Hall and features the portrait of Sir Derek Greenaway by Michael Noakes.

This engaging portrait of Sir Derek Greenaway (1910-1994) is to be found in the Stockroom.  It was commissioned from the distinguished portraitist and landscape painter Michael Noakes in 1984, the year in which Sir Derek obtained the Silver Medal of our Company, and it was presented to the Company by Sir Derek himself.

An Appreciation of the life of Sir Derek Greenaway published in early 1995 in the Company’s Journal contained the following paragraphs.

“In his Times obituary Sir Derek Greenaway, Bart CBE TD JP DL, was described as ‘… a tall, well-built man, (he) was often impetuous and impatient, speaking his mind with little regard for political correctness. His off-the-cuff wit could sometimes upset people, but he was also spontaneously generous and kind – and grateful for all acts of kindness towards himself’.

“Sir Derek’s devotion to the Stationers’ Company was legendary: from being Cloathed in 1931 and after distinguished war service, he was Renter Warden in 1945-46; called into Court in 1966, he became Master in 1974-75 and was awarded the Company’s Silver Medal in 1984.

“Together with Past Master David Wyndham-Smith, himself later awarded the Silver Medal, he fought a five-year battle on behalf of the Company with Haringey Borough Council to recover the charitable assets vested in the Stationers’ Company School at Hornsey, which the Council had closed.

“The Master, Richard Haselden, recalled that ‘… perhaps his greatest contribution had been the conduct, as Chairman of the Schools Committee, of the negotiations with the Charity Commission over a period of two years, which led to the establishment of the Educational Trust  … We have lost a good friend and a splendid servant.’ “

In addition to an outstanding career in civic affairs, Sir Derek was an energetic and shrewd businessman. After the Second World War he revised and greatly expanded Daniel Greenaway & Sons, the City printing company founded by his grandfather and of which he was Chairman.  In this he followed in the footsteps of his formidable father, Sir Percy Walter Greenaway, 1st Baronet of Coombe, JP and Lord Mayor of London in 1932-1933.

Sir Derek’s portraitist, Michael Noakes (1933-2018), was an acclaimed specialist in this field.  He received his training at the Royal Academy Schools, then quickly excelled in portraiture and in landscape, becoming a Member of the Royal Society of Portrait Painters, Chairman of the Contemporary Portrait Society and finally President of the Royal Institute of Oil Painters.

He had a prolific and illustrious career. His sitters have included several members of the royal family including the Queen, the Queen Mother, the Prince of Wales and Princess Anne. Noakes’ many other commissions have come from the world of performing arts, from writers, from politicians (including Margaret Thatcher and Bill Clinton), lawyers, churchmen (including Pope Benedict XVI), as well as from businessmen and leaders of industry such as Sir Derek.

Noakes’ reputation overall was for being a traditionalist, but he had an innovative streak and a strong sense of humour. As an article in the Guardian noted, “Adding extra limbs to signify movement or showing subjects reaching out of painted frames were just some of the techniques Michael employed to keep his audience on their toes”, as we see in his wry and affectionate portrait of Lord Anthony Giddens.

Whether Sir Derek was happy or sad to be denied this particular form of presentation is not recorded.