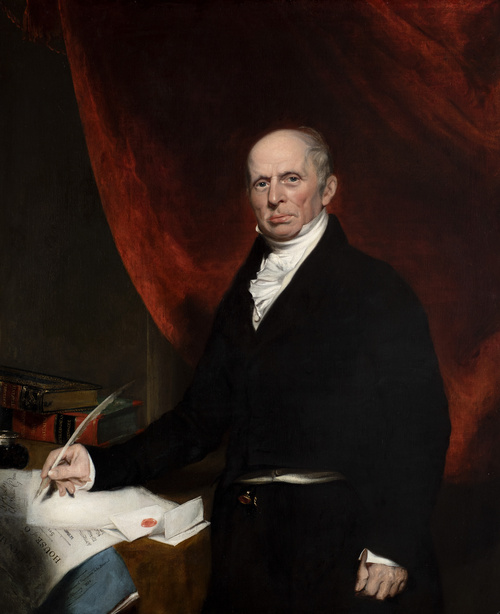 This article by Liveryman John Peacock focuses on the grand-manner portrait of Luke Hansard (1752-1828) by the distinguished Regency portraitist and pupil of Sir Thomas Lawrence, Samuel Lane (1780-1859).

Luke Hansard, printer to the House of Commons, was born in 1752 in Norwich. He was educated at his local grammar school, served a standard seven-year apprenticeship with a town printer, and then, at age twenty, struck out for London ‘with only a guinea in my pocket’ as his autobiography relates. Fortune was with him: he found work as a compositor in the office of Henry Hughes, an ambitious and successful printer whose work included reports from the House of Commons. Hansard’s work on these reports would set his course for life.  A man with an enquiring mind, he progressed rapidly from the composing room to set about learning every aspect of the company’s business.  By 1794 he had become a partner, and the firm had become Hughes & Hansard.  That same year he was admitted to the livery of our Company.

Over the preceding twenty years the volume of printing for the House of Commons had been steadily growing, and the company had expanded to meet these larger commitments. By 1800 Hansard had taken his two sons James and Luke Graves into the business, Mr Hughes had retired, and the firm had become Luke Hansard & Sons.  It had been a steady rise to the top, enabled by a boundless appetite for work, a fine eye for detail, and a determined, even implacable, sense of duty and responsibility.

Much other work continued alongside the parliamentary reports.  Those whose admiration Hansard won by the accuracy, timeliness and reliability of his printing company were Edmund Burke (writer on the beautiful and the sublime), and that formidable task-master Dr Samuel Johnson.

Luke Hansard & Sons continued to print the daily proceedings of parliament, now called the Journals of the House of Commons, right up to Hansard’s death in 1828.  The association of the Hansard name with these publications was now secured, and ready to be built upon by his successors.

Samuel Lane, the painter of Hansard’s portrait, was another Norfolk boy like Hansard, and may have been introduced to him through the East Anglian connections both men had in common.

Lane was born in King’s Lynn in 1780 and early in his childhood had suffered an accident which left him deaf for the rest of his life (and partly dumb).  Like Hansard, Lane moved to London straight after local schooling and first studied under landscape artist Joseph Farington.  Then, like Hansard, he had a stroke of great good fortune which set him on his path in life: he was accepted into the Academy Schools where he studied under the famous and influential portrait painter Sir Thomas Lawrence, fourth President of the Royal Academy. At the end of his studies Lawrence took on the young Lane as his assistant.  It was a priceless opportunity.  Lane remained closely associated with Lawrence right through to Lawrence’s death in 1830, developing a portrait style strongly influenced by his. It was in the latter stages of this period that Lane painted our canvas of Luke Hansard.

By this time Lane’s own practice was firmly established.  He had commissions from a wide clientele of politicians, churchmen, prominent civic citizens, members of the legal profession, men of learning and enterprise.  Thomas Telford was amongst his better known sitters. He was a reliable contributor to Royal Academy exhibitions, sending over 200 portraits over a span of fifty years. Many of his portraits were engraved as mezzotints.

In later life Lane returned to his East Anglian roots: he retired to Ipswich where he died in 1859 at the age of 79.

Further pieces by John Peacock about the paintings of Stationers' Hall  can be found by scrolling down  this Features section of the website and in Archive News there is a more in-depth article about Luke Hansard by our Archivist, Dr Ruth Frendo,  which you can read by clicking here.