In the first of a short series of articles about the paintings to be found in Stationers’ Hall, Liveryman John Peacock introduces the large and prominent painting which hangs in the alcove on the end wall of the Court Room facing visitors, King Alfred Dividing His Last Loaf With The Pilgrim.

This impressive painting, made in 1779 by Benjamin West, second President of the Royal Academy, is by far the most prestigious (and valuable) of all the paintings held in the Stationers’ interesting collection.

The painting captures a scene from historical tradition.  King Alfred, king of Wessex, has been forced to take shelter during his battles against the Danes.  A foot-weary and hungry pilgrim passes the house where Alfred is in hiding.  Alfred, himself reduced to penury, nevertheless takes the last loaf of bread which he and his family have to eat and shares it with the pilgrim.  King Alfred sits centre stage in the painting, dressed in Christ-like white robes. To the left is the pilgrim, meagrely dressed, humble, grateful for this gift of life-giving sustenance. To the right stands the king’s family group. The children, maybe, appear less than happy at this turn of events. Indeed you can almost read into their expressions – “But mum, doesn’t charity begin at home?”!

But of course the moral message of the painting is clear. Charity comes as a natural duty to a great man, and is willingly given, even at the cost of personal sacrifice.

Although the picture is in generally good condition, it was cut down at some point in its life both at the left and right hand sides as a contemporary engraving made by William Sharp in 1790 reveals: 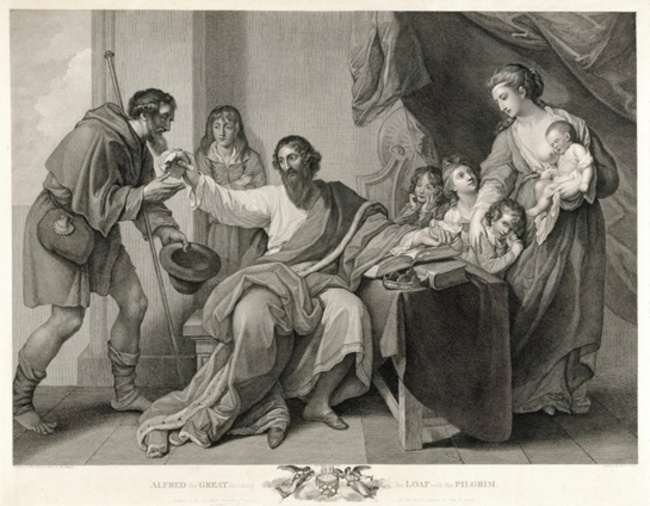 The painter, Benjamin West, was a younger contemporary of Sir Joshua Reynolds and succeeded him as President of the Royal Academy in 1792, remaining in post (with the exception of a single year) until his death in 1820.  West was an American, born in 1738 in Pennsylvania, the tenth son of an innkeeper. Entirely self-taught as a portrait painter, he gained a small amount of local success and enough patronage to head out to Europe, first on the obligatory “grand tour” of Italy, and then on to England by 1763.  Here his career rapidly flourished and he never returned to America.  Aside from grand manner portraits, his specialty soon became subjects much in the character and spirit of our own King Alfred – large, morally-charged history paintings with subjects taken from classical and British history, from literature and from folk tradition. In England he became known as the “American Raphael”.

The background story to our painting is an interesting one.  In the 1780s West was one of many contributors to a “Shakespeare Gallery” project led by Alderman John Boydell, publisher (whose portrait also hangs in the Hall and who will be the subject of a later article). Boydell’s project involved contracting many of the famous painters of the day to illustrate the works of Shakespeare, following which he would sell to the public both the original paintings and then, more importantly, sets of printed engravings of the paintings. Paintings of other historical and literary subjects were commissioned at the same time and with the same aims.

Our ownership of King Alfred dates all the way back to the time of that project.  Our painting was presented to the Company by Alderman Boydell himself after he became Master of the Company in 1783 and then Lord Mayor of London in 1790.