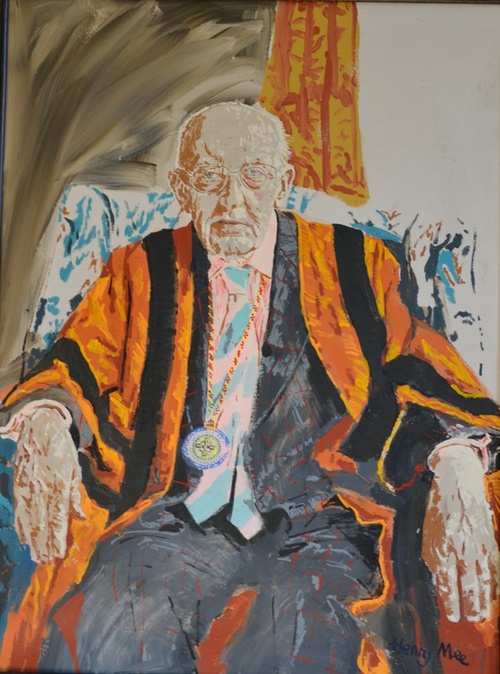 In the second of a short series of articles on the paintings in Stationers’ Hall, Liveryman John Peacock discusses the striking portrait of Sir Edward Pickering (1912-2003), painted in 2000 by Henry Mee and situated in the Stockroom.

Situated as it is among portrait paintings produced in previous centuries, academic in style and conventional in appearance, Henry Mee’s portrayal of the powerful newspaperman Sir Edward Pickering brings many people up short with its radically different colouring, style and approach.  It is fair to say that it is a portrait which divides opinion.  I wonder how many of us are aware that Henry Mee – the artist -- is one of Britain’s most respected portrait painters, with many commissions from members of the Royal Family to his name, as well as myriad commissions from the great and good – politicians, statesmen, captains of industry, cultural icons – of recent decades?  And that this painting is amongst the most valuable we hold in the Stationers’ collection?

The subject of Henry Mee’s painting, Sir Edward Pickering -- ‘Pick’ as he was universally known -- enjoyed a Fleet Street career of legendary proportions. From humble beginnings on the Northern Echo in Manchester he moved to become chief sub at the Daily Mail in London and then, after distinguished war service, was awarded successively grander roles first at the Daily Express under Lord Beaverbrook (where as subeditor he tutored a new incoming raw recruit, Rupert Murdoch); then at the Daily Mirror under Hugh Cudlipp; rising finally to the post of Chairman of all the Mirror Group newspapers. But the closest association of his life came last, at an age at which when many Fleet Street men would have long retired – when a warm and close relationship with Rupert Murdoch, often portrayed as “father-son”, persuaded Sir Edward back into service to join the board of Murdoch’s HarperCollins, and later become chairman of the prestigious Times Supplement Ltd and a director of Times Newspapers Holdings Ltd.  In those positions Sir Edward remained a highly valued advisor to Rupert Murdoch until the end of his life.

In addition to an outstanding newspaper career, Sir Edward (as his Guardian obituary noted) was “a brilliant jazz pianist and a considerable expert on jazz and classical music; a voracious reader, with an encyclopaedic knowledge about an astonishingly broad range of literature and history; and a skilled bookbinder, which, apart from piano playing, was his main hobby”.

The artist behind our painting of Sir Edward, Henry Mee (b. 1955). is one of Britain’s most distinguished portrait painters, with a colourful and highly recognisable style he has made all his own. He has been the subject of two major solo exhibitions, the first in 1990 (British Eminencies) and the second in 2001 (Henry Mee: Portraits of Eminent Britons).

Fascinated by his work and illustrious career, I contacted Mr Mee and he replied extremely graciously with his memories of the sitting for our portrait:

“I had the honour to paint Sir Edward Pickering in the spring of the year 2000.  Sir Edward sat to his portrait, commissioned by his wife Lady Rosemary, who wanted to have a record of him for future generations, in their large ground floor flat in a stucco house opposite Hyde Park. Sir Edward wore a grey two-piece lounge suit and robes.  …  Sir Edward and Lady Rosemary were warm and friendly.  Sir Edward was wise and relaxed.  There would often be a black limousine with a chauffeur outside the flat, which was near the Albert Hall, ready to whisk Sir Edward off to see Rupert Murdoch … When the portrait was delivered, Lady Rosemary was quite overcome, shed tears, and hugged both me and my wife Jane, saying how pleased she was, that it portrayed him exactly as she knew him.”