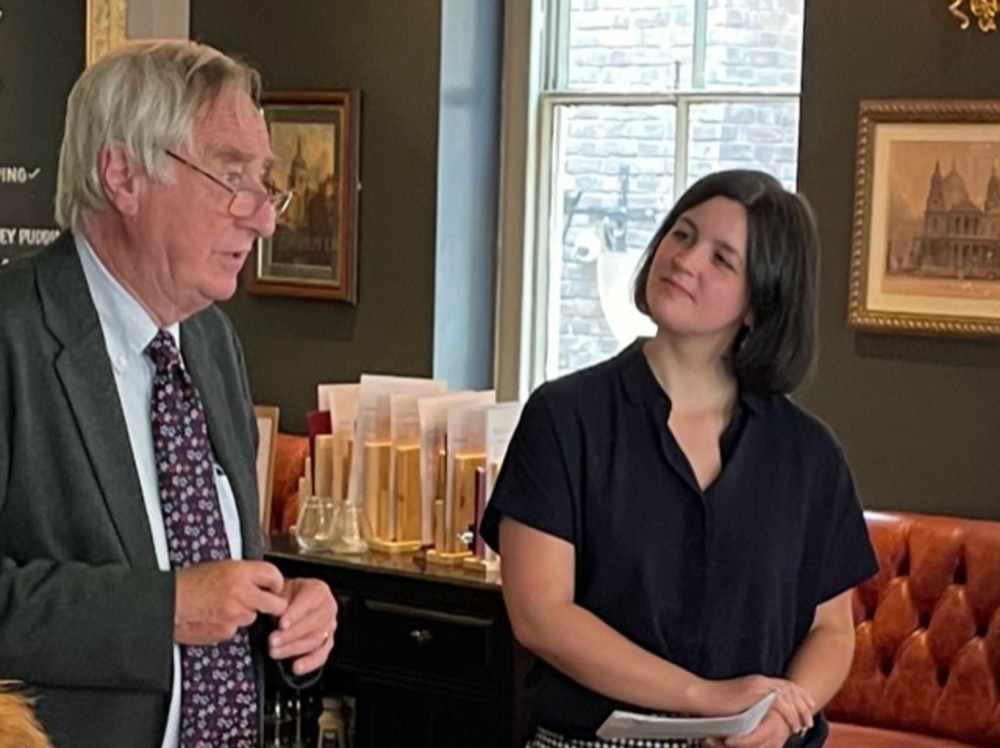 On 31 May at a highly-successful, sell-out Literary Lunch in Ye Olde Watling Pub the roles were reversed when our usual interviewer, Liveryman Peter Day was interviewed by Freeman Georgina Brown who last year had been one of Peter's Interviewees!.

Livery Chairman Mike James introduced the proceedings by saying that  these Literary lunches started in 2020 and after just one with Simon Heffer, they moved online thanks to the lockdown.

Over the next 20 months there were18 Literary Cocktail Evenings online. They were very successful   and raised almost £4000 from book sales, and most importantly kept members and friends involved. The main reason for the success was Peter Day. He is such a professional with an excellant relaxed interview style.

Meanwhile Freeman and Stationers' Foundation Trustee Georgina Brown was doing the same with The Wilbur Smith Foundation promoting their annual prestigious prize , and in August 2021 Georgina, along with two of her authors were interviewed by Peter in one of our most viewed online events.  Georgina was  delighted when Mike James asked if she would consider a conversation with Peter.  She was slightly daunted knowing that  Peter is an interviewer extraordinaire and bearing in mind his  years reporting and presenting for the Today Programme, Financial World Tonight, In Business, and Global Business, and sourcing his contributions to From Our Own Correspondent but accepted the challenge!

Georgina asked Peter what qualifications he had to become a “Business” broadcaster, and he said he had none and that at the BBC the business team were seen as a novelty. Things have changed in recent years, although searching for a good up-to-date story was still the key.

When asked about the reason that he become such a success Peter said that he was fortunate to learn very early in his career, that he was not in fact broadcasting to an audience of millions but actually to one single individual who would perhaps be driving a car, having breakfast, or doing the washing up, unfortunately some people never learn that lesson.

They briefly touched on Peter’s short but disastrous time at TV AM and how he was welcomed back to the BBC, and then his favorite time with “From your own correspondent” and working with the veteran producer Tony Grant, and how that enabled him to get beyond the story and talk to people who actually made things happen.

Asked about the future of the BBC, Peter was not confident that the current licence based model could survive in the long term.

In an amusing interlude  Peter explained why despite interviewing nearly all the leaders in IT that he does not have a mobile phone , and how he has always had a dislike of the phone even in today's inter-connected society.

Georgina’s closing question was Peter’s view on the Stationers' Company and being a Liveryman, which he considers a great honour, and we could all see Peter’s passion for “The Company”.

The positive feedback from the lunch was amazing as members saw an established star of The Stationers' Company being interviewed by a rising star, both have the natural ability to bring out the best in the person that they are engaging.

There will be fuller coverage of this Literary Lunch inthe next issue of Stationers' News.