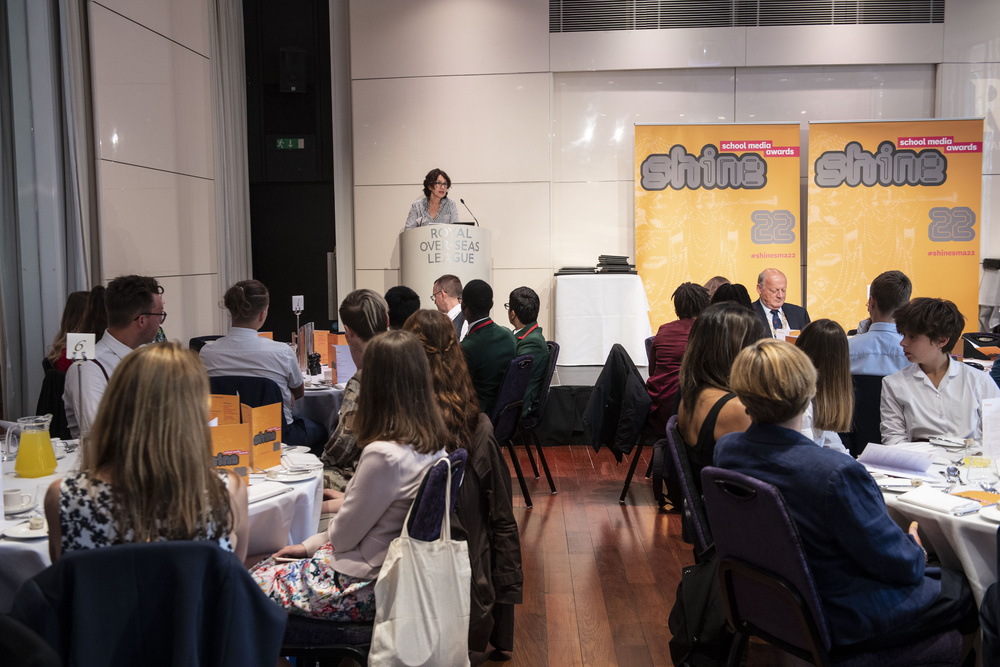 Fresh from organising the nation’s Platinum Jubilee celebrations, guest speaker Sir Nicholas Coleridge had inspirational words for the winners of the Shine School Media Awards on June 27. ‘If my school hadn’t had a magazine to work on, to get my eye in, I probably would have ended up doing a completely different job,’ the former editorial director and president of the Conde Nast media empire told them. ‘All the skills I learnt on a school magazine have been so helpful – commissioning articles, writing a brief, sub-editing, design and layout, writing headlines. They gave me a real head start in life.’

For the second year running the annual ceremony was held at a location other than the Stationers’ Hall – this year at the Royal Over-Seas League in Mayfair, where pupils, teachers, judges and guests assembled for an enjoyable day of workshops, seminars, lunch and prizes.

Building on the success of its first decade, the competition, run annually by the Stationers to celebrate school journalism in all its various forms, is clearly going from strength to strength, evidenced by the 341 entries it attracted this year as against 228 in 2021. A total of 57 schools were involved, 20 of which were new to the Awards – a hugely encouraging figure. The hope is that winners will be inspired to become involved with the Stationers in future, bringing the ideas and insights of their generation to the company. Indeed, two former winners joined the judging panels, which also included for the first time prestigious names such as those of Kenya Hunt, editor-in-chief of Elle UK magazine, and Liveryman and former BBC presenter Peter Day.

A highlight of the event was a moving speech from Alex Mortimer, the first-time winner of the Terry Mansfield Award for Tomorrow’s Talent, set up in memory of the much-loved former Liveryman and a major inspiration behind the competition.

‘The most important skill that the Shine Awards helped me to develop was courage,’ Alex told the audience. ‘Before Shine, I was often nervous about using my own voice. I’d be that person in a group that always nods along in agreement, polite and careful not to offend. But by leading a team, writing articles and creating a magazine and podcast, I became braver and bolder.’

You can read her full speech here.

Her appreciation of the Awards was echoed by numerous teachers who wrote in after the event. ‘We have entered the Shine Awards for seven years and the motivation, aspiration and challenge that the competition gives our students is incredible,’ wrote one. ‘Attending the magnificent Awards ceremony in London and hearing from experts within the field of journalism and publishing is truly inspirational. I would advise any teacher to get involved and to get their students involved too.’ Another commented: ‘Being part of Shine was a wonderful experience for our students. It gave them a tremendous sense of recognition; the support from the organisation was excellent and the final event in London surpassed anything I have ever attended of this type.’

Thanks to the quirks of Covid and the fact that last year’s event was held later in the year, Robert Flather has been Master for two Shine awards ceremonies, giving an entertaining and informative speech outlining the history of the company at both. The committee is hugely grateful to him for the time and trouble he has taken to be involved, and for his unstinting support for the competition.

We are very much looking forward to being back in our traditional home for next year’s event.