THE ANNUAL INSPECTION OF PAST MASTER RICHARD JOHNSON'S GRAVE 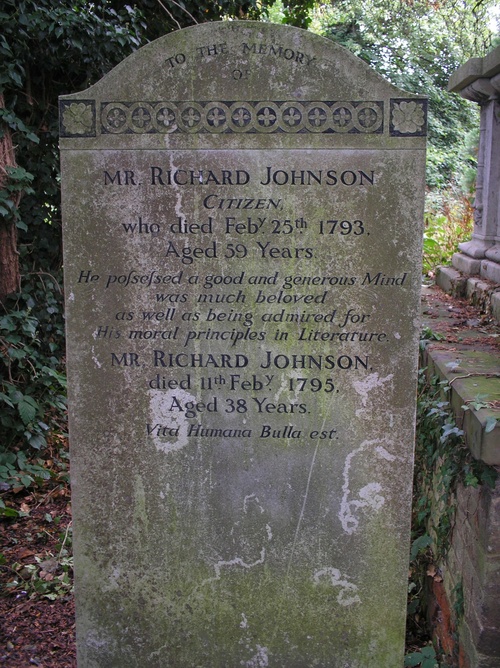 I made the annual inspection on behalf of the Company of Past Master Richard Johnson's grave at St Mary Hendon this afternoon, Wednesday, 3 March  2021.

The area round the headstone is tidy and the stone itself pretty clean apart from a little discolouring at the top, and the inscription is bold and clear. The stone is set firm. Clumps of daffodils were brightening the churchyard on a dismal grey and rainy day. It's a good position on the edge of the churchyard: if he turns his head to the right RJ has a view clear down to London.

Johnson the Stationer wished the Master and Wardens to go to Hendon on the anniversary of his father's death to inspect the tomb and to hear the "Bubble" sermon followed by a dinner. For City Stationers it would have been a bit of an expedition.The Hendon dinner was discontinued in 1917 and the service is now held at St Bride's, although for a number of years it was held at St Martin Within Ludgate.

I would urge anyone who happens to be in the area to visit. You can park at the Greyhound pub or even closer, in Church Terrace. Just take a few minutes to stand there and contemplate the nature of 18th-century charitable giving to "old Widows", as his will put it!

On receiving Past McKane’s the Master provided a further point of interest pertaining to the church yard!  He writes:

Also in the same church yard is Herbert Chapman lured from cup-winning Huddersfield Town by Arsenal. It was he who made them the star team of the 30s, it was he also who persuaded the London Passenger Transport Board to change the name of Gillespie Road underground station to Arsenal, the only underground station named after a football club. He was a remarkable man and a replica of Epstein’s statue of him stands outside the Emirates

Stadium (see photo). Arsene Wenger now vies with him in the club’s hall of fame!