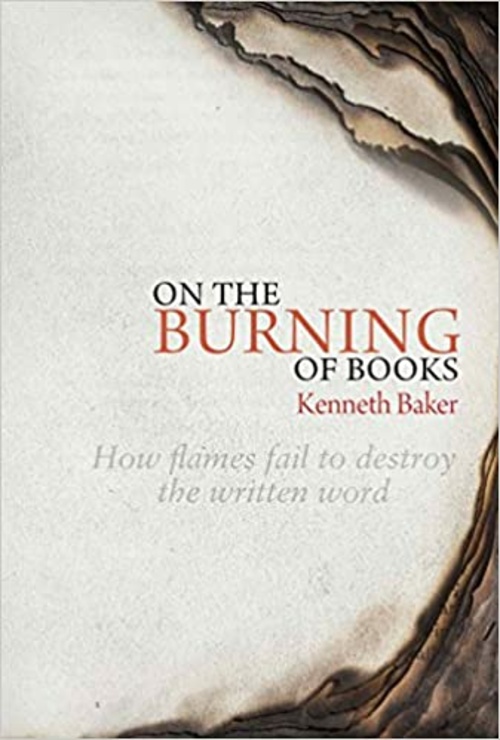 Following the LivCom Literary evening with Richard Ovenden OBE in which Richard talked about his book, Burning The Books, we were reminded of a piece that Court Assistant Tim Connell wrote when Kenneth Baker published a  book entitled, On the Burning of Books.  We reproduce Tim's piece here.

“On the Burning of Books” by Kenneth Baker (Unicorn 2016) looks at the controversy surrounding many authors and their publications and provides an enormous range of examples. It makes for curious if rather depressing reading!

In his Areopagitica of 1644, John Milton put forward a passionate case for freedom of expression and the right to publish without hindrance. He himself was in some danger at the time of the Restoration when his books were burnt outside the Old Bailey, and were also removed from university libraries. It is a danger which has flared up at different times and in different parts of the world both before and since, and to this day people take enormous risks either to get a story or to publish an opinion which is not in line with standard orthodoxy.

In a rare poem, Ted Hughes observes that “What took place when Alexandria’s libraries burned/Brain-damaged the human race”. To judge by the number of libraries and collections of books that have been destroyed by fire down the ages, that damage could be almost terminal.  Some were lost by accident. Even Ben Jonson suffered when a candle possibly set fire to his study. As he laments in his poem “An execration upon Vulcan”:

Thy greedy flame thus to devour

So many my years’ labour in an hour.

Apart from his reference works and favourite reading, he also lost many years of jottings in his own private notebooks, of the sort that are of infinite value to writers – and anyone studying them in later years.

But then as many books have been saved by chance as consigned to the flames. A remarkable number of authors down to the modern age have directed their executors to destroy diaries and notebooks. Franz Kafka is known to have burnt at least one short story and a play himself, but his executor Max Brod baulked at destroying what turned out to be no fewer than four of Kafka’s novels in draft form. Some writers burnt as they went along and even went to the extreme of destroying earlier published works of which they disapproved, Graham Greene being one of them. Even Dylan Thomas (who managed to leave a draft of Under Milk Wood on the bus) was scrupulous in throwing away working copies of his poems, though he did sell four of his notebooks when times were hard.

Half-a-dozen more were lost or destroyed, apart from one which was given to someone else to burn – and who claimed to have forgotten to do so. (It sold in 2014 for £85,000.) Thomas Hardy destroyed the drafts of his poems as he went along and late in life cleared out thirty or forty years’ worth of old paper, though he donated the drafts of most of his manuscripts to worthy places. He was also the victim of the deliberate burning of Jude the Obscure by the Bishop of Wakefield as a sign of disapproval of its theological content.

The destruction of books which generate public disapproval is widespread and deep-rooted. From the burning of heretical texts in earlier times (“naughty books” and the Company’s own garden spring to mind!) to the systematic and ceremonial burning of books in Nazi Germany, the public destruction of books and the ideas they contain is distressingly common. Even worse perhaps is the attack on libraries and archives with the deliberate intention of extirpating whole ideas or even episodes of history. In 1992 the National Library of Sarajevo was targeted by Serb forces, who cut off the water supply and covered the doorways with machine guns to ensure that nobody would either try to save the collections or put out the fire. 155,000 rare texts and over 400,000 manuscripts went up in smoke.

So it is strange that combustion has unintentionally been the cause of conserving a large library from Roman times – in Herculaneum, where the level of heat and the speed of combustion caused by the eruption of Mount Vesuvius in AD79 has preserved nearly two thousand scrolls. Although they are effectively burnt to a crisp, modern techniques such as viewing the scrolls in the infrared range at a wavelength of 700-900 nanometres or using a computerised tomography scanner has enabled researchers to decipher at least some of the text, much of which (oddly enough) appears to be in Greek.

Ray Bradbury’s dystopian novel Fahrenheit 451 of 1953 examines a world where the written word has been destroyed systematically and where firemen are on duty to burn any texts still to be found. (Paper actually burns at different temperatures: 451ºF is the average ignition point, though a novel entitled 212.8ºC would never have sold.) But it is a tragic reality that whereas everybody everywhere is sitting down every day to put pen to paper, someone somewhere else is putting a match to it.

Of course, there are entire collections of letters by distinguished authors in print, though from the above it is surprising that so much has survived. The letters of Horace Walpole (1717-1797, son of Sir Robert Walpole and the man who coined the word ‘serendipity’) run to no fewer than thirty-eight volumes. Ernest Hemingway left an estimated six thousand letters (which will appear in due course in a projected seventeen volumes) whereas Rudyard Kipling’s letters run to only six volumes, as so many of his private papers were destroyed by his wife.

An irony is that collections of letters of this size are unlikely to be available to modern day researchers as most correspondence will go by e-mail. Even worse, draft manuscript versions by famous authors are less likely to be available given the modern day requirement for authors to present camera ready copy without the slightest hint of a typo. How different from the days of Charles Dickens in London or Honoré de Balzac in Paris whose manuscripts were notoriously difficult to read, but which at least give modern academics an insight into the creative process. In his lecture at Stationers’ Hall*, our very own Honorary Freeman Vint Cerf gave us some interesting insights into the self-archiving web, which at least goes to show that this question is being addressed, although there is the further curious issue of preserving not only the data but also the software and hardware necessary in order to read it. And with so much out in cyberspace there is the optimistic thought that it will be harder in future for individuals or governments to suppress thoughts and ideas – no matter how hard they will undoubtedly try.