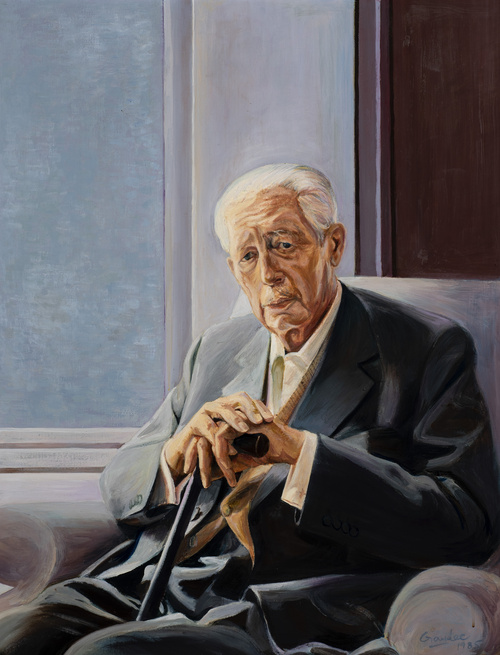 In his fourth article on the paintings in Stationers’ Hall, Liveryman John Peacock reveals the intriguing story behind the portrait of Harold Macmillan Earl of Stockton painted in 1985 by Gandee Vasan and situated in the Stockroom.

This striking portrait, situated on the facing wall of the Stockroom by the entrance to the Hall, is easily identified and well known to all Stationers.  Even better known is its eminent subject, Harold Macmillan Earl of Stockton, Conservative Prime Minister from 1957 to 1963. ‘Supermac’ as he was known to caricaturists of the time, was renowned for his ready wit, his calm and courteous manners, and his great personal charm.  Situating himself firmly as a ‘One-Nation Tory’ Macmillan steered Britain through a period of notable economic growth and success until the scandals of the Profumo era engulfed his party and led to his resignation.

At all times Macmillan had close connections to the world of the Stationers’ Company.   Although a career politician, his roots and background lay firmly in the family publishing business founded by his forebears as far back as 1843. Following his resignation from politics he chaired the company for ten years, 1964-1974, during which time he published his biography, written by Alastair Horne, and his war memoirs.  Macmillan was created Lord Stockton in 1984, just two years before his death at the grand age of 92.

But how many of us know the intriguing story of our portrait, and its portraitist?  Here is that story in the words of its talented creator, Gandee Vasan.

“I had the great honour and privilege of painting the last official portrait of Harold Macmillan, which was unveiled on November 19th 1985 by the Prince of Wales. At the unveiling, Macmillan started his speech by saying: “I feel like a man who comes down to breakfast, opens the newspaper and reads his own obituary in it”, and with that he brought the whole house down! He was very frail at the time as he was 91 years old but he was completely lucid and his sense of humour was undiminished.

When he was approached to have his portrait painted, he agreed on condition that it was a young artist. So in a way, my opportunity to paint him, was initiated by Macmillan himself. His grandson the Earl of Stockton, Alexander Macmillan, related to me what his grandfather had quietly said to him: “A famous sitter doesn’t need a famous artist, an unknown sitter needs a famous artist”. This is very true. He was very conscious of giving opportunities to young people and I was 23 at the time.

The Worshipful Company Of Stationers and Newspaper Makers did the commission through the Royal Society Of Portrait Painters who had a competition to find someone under the age of 30 to paint the portrait and I was fortunate to have won it. I was 23 at the time. There was a small team of people who were very involved in getting the portrait done, headed by John Heyer of John Heyer Paper who was very helpful at the time and was instrumental in getting the painting completed and framed.

Macmillan gave me six sittings at Birchgrove House in Sussex. I would turn up every Friday and his grandson Alexander picked me up from Haywards Heath Station. I used oil paint on canvas for the picture. He was dressed in a suit but chose not to wear a tie. Because of his advanced years, sitting for the portrait was somewhat of a challenge as he used to sink into sleep after about fifteen minutes. So I relied on photographs to finish the painting. His face was full of character and he was a joy to paint.

We used to have lunch together after the sittings but he didn’t eat much and only had a glass of sherry and a slice of cake, after which he smoked his pipe. I remember him saying that pipe smoking had a “soporific” effect. I didn’t know what soporific meant at the time and went home and looked it up! He argued that tobacco wasn’t the problem but cigarettes were, as the paper was poisonous! As he enjoyed reading so much he keenly felt the loss of his sight and was very grateful for the talking books that were sent to him by the Royal National Institute for the Blind.

The unveiling was a tremendous success and was attended by many members of parliament and luminaries. I was delighted that all the preparatory sketches were sold out on the day.

The whole project, from winning the competition, to the precious time I spent with him, to the unveiling of the portrait by the Prince, was a truly enriching experience.”

Gandee Vasan was born in Colombo, Sri Lanka in 1962 and came to the United Kingdom in 1977. He received a BA honours in Fine Art from Kingston Polytechnic and an a Post Graduate Diploma in Computer Graphics from Coventry. His work was exhibited at the National Portrait Gallery in 2019 as Part of the BP Portrait Awards. and in 2012 and in 2005 in the Taylor Wessing Photographic Portrait Awards. His paintings were also exhibited in the Royal Society of Portrait Painters Awards at the Mall Galleries in 1985.

Gandee is currently a commercial advertising photographer and also a contributor to Getty Images producing some of their most successful images. He is represented by Envie D’art in Paris and his commercial work is in the Getty collection. Most recently, after an award winning international career in photography, he has returned to his first love, painting, and his works are held online by Saatchi Art and Singulart.