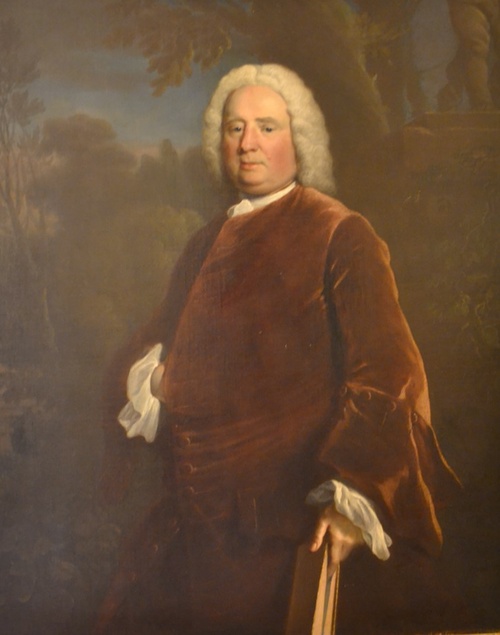 In the third article on the paintings to be found in Stationers’ Hall, John Peacock and Margaret Willes consider the imposing three-quarter-length portrait of master printer and ‘father of the English novel’ Samuel Richardson (1689-1761) together with the artist who painted him, Joseph Highmore (1692-1780).

Joseph Highmore, the painter of our portrait, and Samuel Richardson, his subject, were direct contemporaries and associates whose careers touched at several points over the years.

Richardson, a Derbyshire lad (like this writer), was bound apprentice to a London printer, John Wilde, at an early age.  Consolidating commercial and family ties through marriage first to the daughter of his erstwhile master and then, after her death, to the sister of a successful bookseller in Bath, Richardson first acquired and then successfully grew his printing business to become an important figure in the London printing, publishing and bookselling worlds.  A Stationer, naturally, Richardson played an active part in our Company for nearly 50 years, becoming a Freeman in 1715, a Liveryman in 1722, and ultimately Master towards the end of his working life.

In 1740, at the age of 50, Richardson wrote the first of three novels on which his fame depends. This was Pamela; or, Virtue Rewarded.  He was encouraged in this venture by his friend and fellow Derbyshireman Charles Rivington, founder of the Rivington publishing house and forebear to the family who would go on to contribute no fewer than twelve Masters to our Company.  Rivington had known Richardson as a 13-year-old apprentice composing love letters for his fellow apprentices less adept at writing than himself.

Told in the form of letters, Richardson’s story – often listed among candidates for ‘the first English novel’ --  concerns a virtuous lady’s maid, Pamela, whose heartfelt letters home reveal her daily battles against an aristocratic employer’s relentless attempts to seduce her. Pamela’s steadfast virtue is rewarded: she reforms her employer and ultimately marries him. The novel aroused strong feelings both for and against its heroine, and the book became an instant best-seller.

Richardson, by now a substantial figure in literary London and an associate of Dr Johnson, William Hogarth, David Garrick and other luminaries of the day, repeated his triumph eight years later with a second novel, Clarissa; or, The History of a Young Lady.  His final novel, Sir Charles Grandison, in which the eponymous male character echoes the virtuous qualities of Pamela and Clarissa, completed a trio of literary sensations. Taken together these high moral tales of social manners ensured the wide-scale reach and success of the ‘sentimental novel’, creating a literary genre which remained in vogue for many decades thereafter.

Our artist Joseph Highmore benefitted no less from the success of Richardson’s works.  A prolific and versatile producer of portraits, history paintings and literary illustrations for a predominantly middle-class audience, Highmore made a series of twelve paintings in the years following the publication of Pamela depicting morally uplifting scenes from the story in that rather stiff and doll-like idiom of many ‘conversation pieces’ of the period.  Here is Pamela herself, now happily married, instructing her children on how they should behave:

In short order Highmore had the series engraved and published as prints, the standard route at this time to commercial profit.  But as an established artist he was also more than ready to give back: like his London contemporaries Handel and Hogarth, Highmore was in the circle which supported Thomas Coram’s Foundling Hospital in its early years, and he donated a painting of Hagar and Ishmael which remains part of their collection to this day.

Highmore’s portraiture business continued successfully throughout his life, and although he never attained the same status as the later generation of more famous eighteenth-century portrait painters such as Gainsborough or Reynolds, his work was valued and widely appreciated in its day. 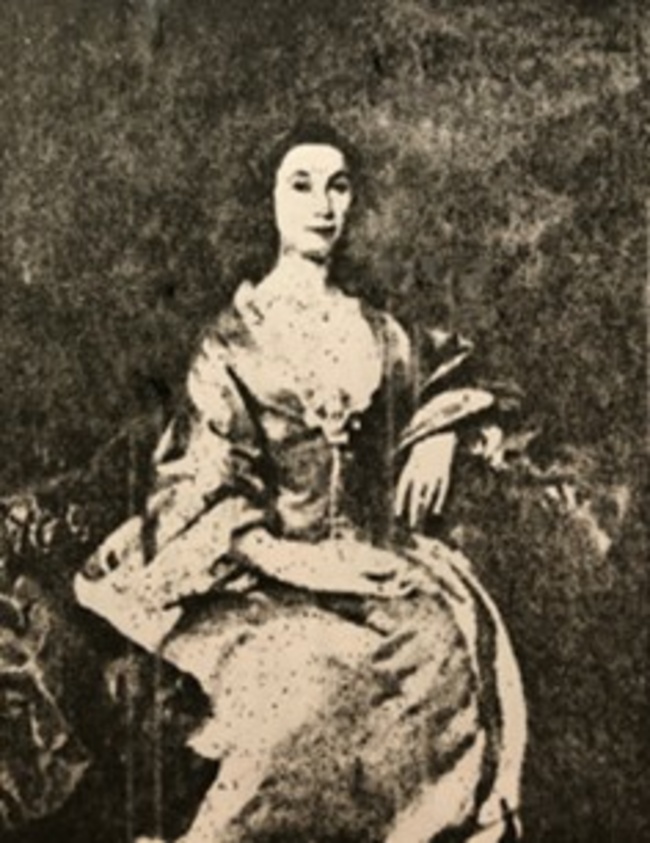 It is interesting to know that in addition to the splendid and forceful portrait of Samuel Richardson we possess, Highmore painted a pendant picture of Richardson’s second wife, née Elizabeth Leake, which hung alongside it in the Hall until destroyed in a bombing raid at the end of 1940.  Now it’s known to us only through rather poor-quality black-and-white photographs (see above).

Highmore painted Mrs Richardson sitting on an elaborate rococo garden chair, with a landscape scene opening up behind her.