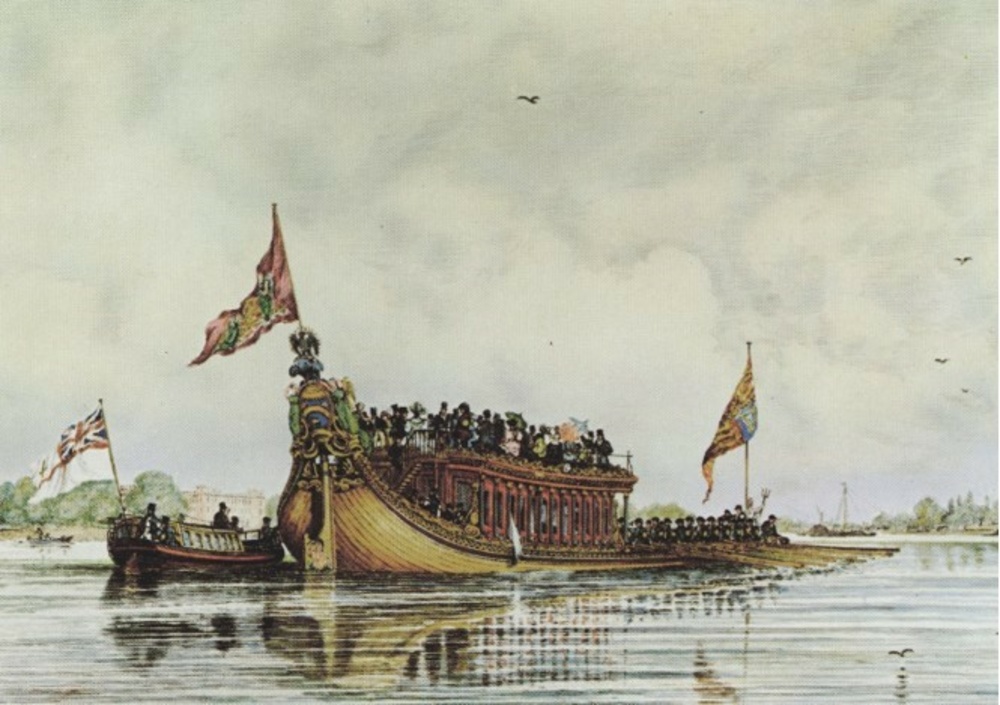 Freeman Richard Gilpin, a volunteer in the Stationers' Library, has written this feature inspired by material on the Company's Barge which he prepared for the display cabinets at Stationers' Hall. Main image: The Stationers' Barge. E W Cooke, 1829. Hand-coloured copy by R Granger Barrett, 1972.

The Lord Mayor’s Procession
As far back as the 15th century there was a procession on the Thames on Lord Mayor’s Day from the City to Westminster, where the Lord Mayor and Sheriffs took their oaths of appointment. Many of the barges that took part were owned and operated by Livery Companies, the first being built in 1453 for the Drapers’ Company.
It was not until 1680 however that the Stationers’ Company launched its own boat so that the Company could participate in this event.
The Order of Procession was determined by the Lord Mayor, and in 1780 and again in 1843 the Stationers’ Company barge was appointed to lead the barges of the other City livery companies. 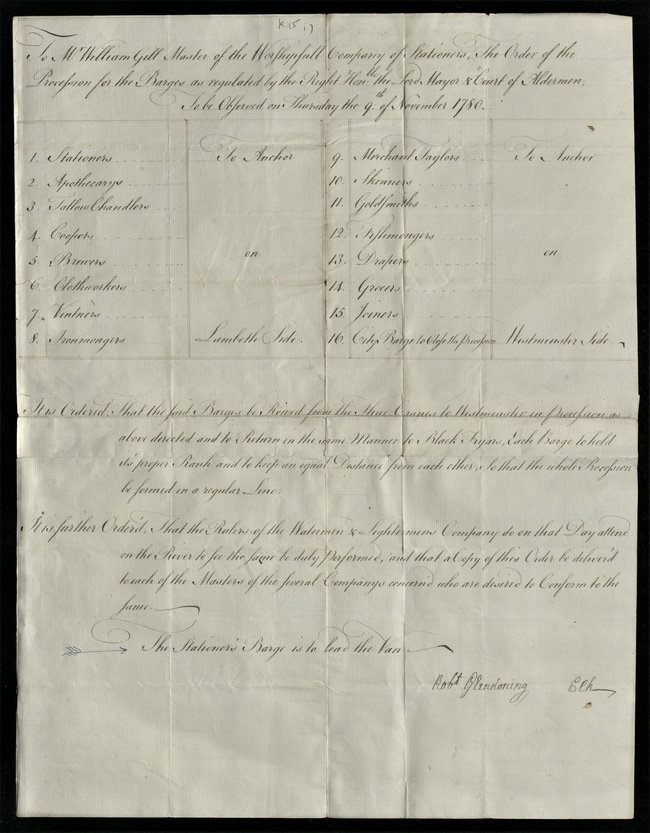 The Order of Procession for 9 November 1780, "as regulated by the Right Honourable the Lord Mayor and Court of Aldermen".
The barges were built on the same principle as the “wherry” – a light shallow clinker built rowing boat used on the Thames for carrying passengers. Originally open with only a canopy at one end to protect the dignitaries, as the barges grew more sophisticated the canopy became a raised platform; this gradually became an enclosed cabin or house, with steps leading up to a deck above.
The design of each barge made provision for the carrying of musicians. This appears to have been the custom on all State Barges and was by no means peculiar to those of the Stationers’ Company. Each barge present at the procession on Lord Mayor’s Day would carry musicians both to entertain the passengers on the barge and the spectators watching from the riverbank.
The power came from the eighteen oarsmen forward of the cabin. The Barge Master sat or stood on a platform in the bows, controlling the oarsmen, and signalled to the mate who stood right in the stern at the highest point of the barge, and steered by means of an elaborately carved tiller. There were also seats for the musicians aft of the cabin.
Accompanying the barge there were usually one or two small rowing boats, known as whifflers, under the control of the Barge Master. They had two or four oars and were equipped with staves; their function was to help in manoeuvring the barge and warning oncoming boats.
The material used in the construction of the barges was almost exclusively wood – English oak for the hull and Christiana deal for the deck. Ironwork was occasionally used, but always in an ornamental capacity.
The Stationers’ Company’s Barge
Once the Company had decided to build its own barge (the first one cost £187), it had to appoint a Barge Master to be responsible for the upkeep of the boat, and he was reappointed (or not) on an annual basis. His status was reflected in his uniform, which consisted of a blue cut-away coat over white stockings with buckled shoes. On his head he wore a velvet jockey cap, and the Stationers’ Company badge was displayed on his sleeve. 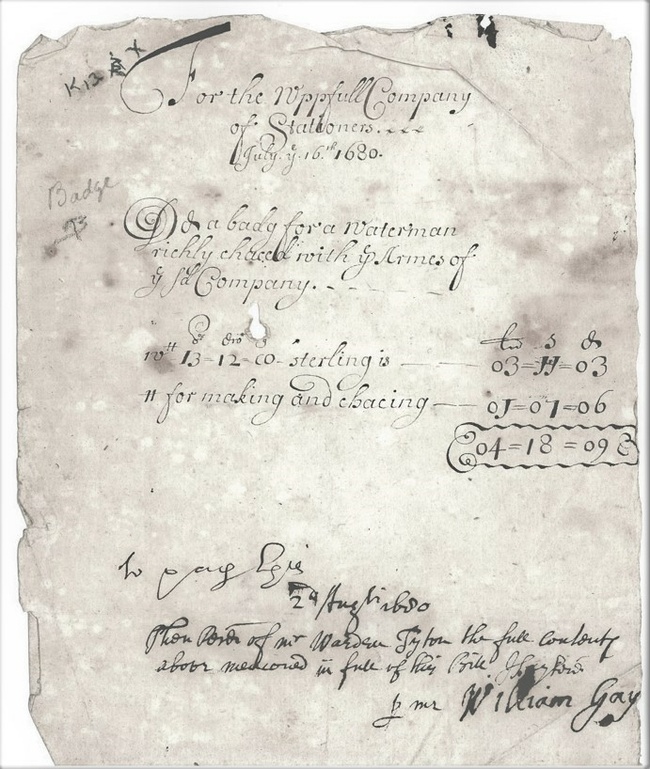 Invoice for the Company's Barge Master's Badge, 1680.
The Company paid for the barge, the badge, and the costs involved in making the uniform (and replacing it every two years), and many of the invoices are kept in the Company’s Archive. The Court of Assistants was responsible for agreeing 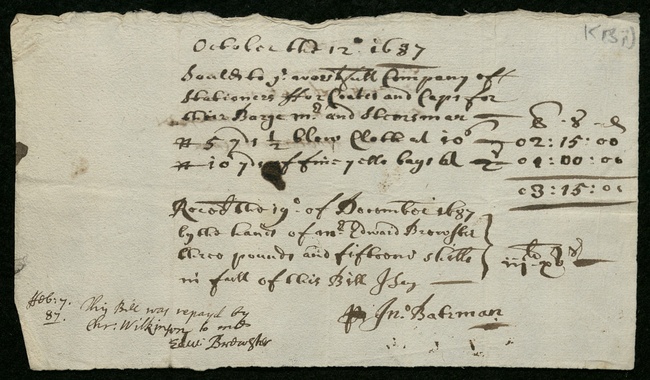 Fabric invoice for coats and caps, 12 October 1687
costs and handling recruitment, and many references to its discussions and decisions may be found in the Court Books; these are also kept in the Company’s Archive.
The Stationers’ barge did not only take part in the Lord Mayor’s procession to Westminster however: in 1806 it took part in a special procession to Greenwich for the funeral of Lord Nelson. 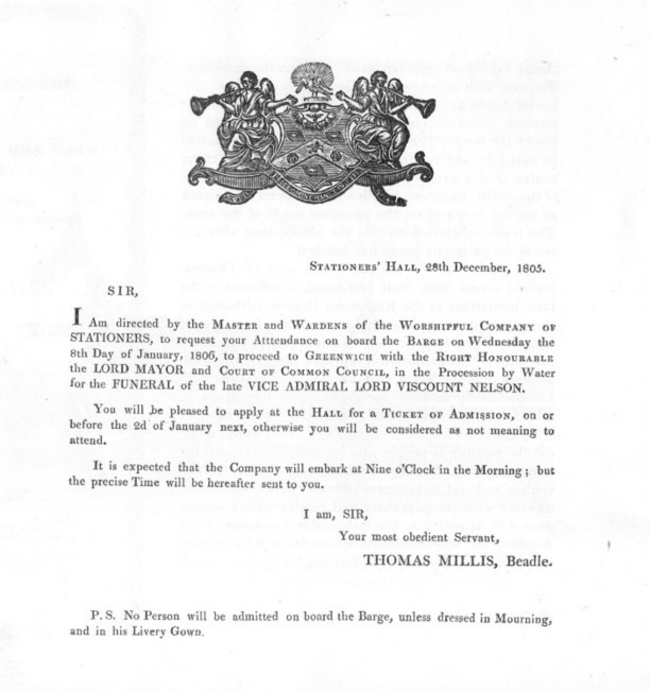 Invitation sent by the Beadle to the Liverymen of the Stationers' Company on 28 December requesting their "attendance on board the Barge" on 8 January 1806 "to proceed to Greenwich" for the Funeral of Lord Nelson
It was also made available to the Master of the Company, who was authorised to take members and guests on a day trip upstream to the Star and Garter Hotel on Richmond Hill, overlooking the Thames Valley.
During the 18th century Richmond and its surroundings were mostly still countryside and parkland with several villas and estates along the River Thames, together with scattered villages and towns. The land on Richmond Hill was initially only big enough for the building of a small inn in 1738, which called itself the Star and Garter.
In 1780 a private residence that had been built next to the inn became part of it, and it started to be referred to as the Star and Garter Hotel.
In the early 19th century, the establishment went through three owners one of whom died in a debtors' prison in 1808. The hotel changed ownership again and reopened in 1809. Prices, said to be half a sovereign to "look through a window", were reported at the time as exorbitant. Following the death of the latest owner in 1815, his widow continued to run the property until selling it in 1822.
The hotel reached the peak of its fame as Richmond itself expanded in the 19th century during the Victorian era. In the period from the 1830s to the 1890s, the hotel guests ranged from literary figures such as Charles Dickens to exiled crowned heads of Europe such as King Louis-Philippe and his wife.
The end of an era
As the years went by the barge suffered from exposure to the elements, despite being stored in a boat house in Lambeth (leased by the Company from the Archbishop of Canterbury), and had to be replaced roughly every forty years by a new one – at considerable expense. It was customary for the Company to offer the rotting remains of the old one to the Barge Master.
After 169 years of maintaining its presence on the Thames the Company decided that it could no longer justify the costs of keeping its barge afloat, and the last one was sold in 1849 to a Mr Hall, who disposed of it to an Oxford college.
There would be no more colourful processions, and no more convivial outings to the Star and Garter for Masters and their guests.
Seven years later, the Lord Mayor’s Procession itself was no more.
Today the Company still contributes to the pageantry of the City by taking part in the Lord Mayor’s Day procession – but now it does so on land.