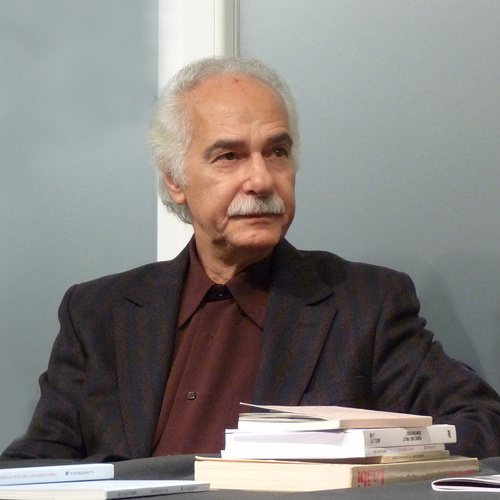 Carcanet Press have given us permission to use this poem, Life, from Beyond the Barbed Wire by Abdellatif Laâbi as our seventh lock down poem suggested by the Poetry Book Society. Members will find it in their own area of the website and should log in and read it there along with all sorts of other items pertinent to the lock down!

It’s enough I woke up

the sun to my right

the moon to my left

and that I walked

From my mother’s womb

to the threshold of this century

It’s enough I tasted this fruit

I wrote about what I witnessed

I never kept quiet about the horrors

I did all I could

and everything I took, I gave over to love

is nothing short of a miracle

Published by kind permission of Carcanet Press, from Beyond the Barbed Wire by Abdellatif Laâbi (2016), translated by André Naffis-Sahely. Available to order here with 25% off for PBS Members.

Written by Abdellatif Laâbi, one of Morocco’s leading poets who was a political prisoner in the 1970s, this moving poem captures the “miracle” and “horror” of life. It's included in his career spanning selected works, Beyond the Barbed Wire, which features several poems from his time in prison. 'Life' holds a prescient resonance in our new locked-down lives and offers a timely reminder of the need to bear witness and appreciate happiness.

Abdellatif Laâbi was born in Fez, Morocco in 1942. In the 1960s, Laâbi was the founding editor of Souffles, or Breaths, a widely influential literary review that was banned in 1972, at which point Laâbi was imprisoned for eight and a half years. Now living in France, Laâbi’s recent accolades include the Prix Goncourt de la Poésie for his Collected Poems in 2009, and the Académie française’s Grand Prix de la Francophonie in 2011.

Join the Poetry Book Society for a whole world of poetry books delivered straight to your doorstep. PBS members enjoy the very best new poetry book, the PBS Choice, and our quarterly poetry magazine full of poetry, reviews and news.